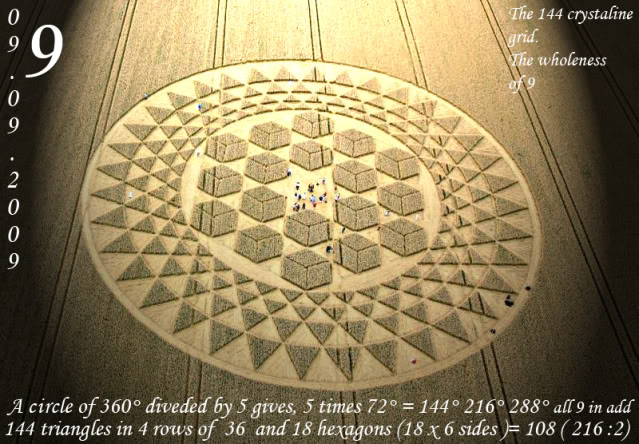 Brenda Tenerelli started the discussion "Crop Circles: Messages from the Universe" in the group CROP CIRCLES on THE FEDERATION OF LIGHT

One of the goals of the American Taoist Healing Center is to research unique natural phenomena; to educate individuals and groups about them, and to apply the results of the research for healing purposes where appropriate. For several years, the Center has led a number of trips to England to experience firsthand the natural phenomenon called crop circles. These journeys have provided new insights on how to use the information and energy contained in the circles for healing. Practicing Wu Ming Qigong, the unique ancient self-healing energy system, allows students to tune into the Universal in a powerful way through active meditation in the crop circles.
The circles leave us with more questions than answers. They are metaphysical in nature. For those who believe that logic and science constitute the sum of reality, the formations provoke feelings of annoyance, disbelief, fear, and a deeply rooted sense of frustration at the lack of a ready, rational explanation. For those whose belief systems extend beyond the boundaries, crop circles take on mystical meanings and offer a sense of communication with an intelligence or consciousness beyond three-dimensional reality.

Splashed across the English countryside in bold, magnificent patterns, these messages from the universe encourage a deep connection to the Universal for those able to experience their energy. Often prior to harvest season, crop circles present themselves, overnight in many instances, and, in a playful, non-threatening way urge the observer to venture closer. They intrigue; they entrance with their intricacies; they manifest intelligence. Apparently, these natural enigmas are not a recent phenomenon. References in local English newspapers appear as far back as 1678. Numerous other references have occurred in earlier centuries. Today the circles are appearing with increasing frequency in places like America, Japan, Canada, Russia, China, Australia and many more locations. Branded as a hoax by some, the intelligence of the formations, the energy they emanate and the unique phenomena surrounding their appearance are unmistakably conscious.

These beautiful sculpted shapes appear mostly in crops of wheat corn or barley. The formations have grown in complexity over the years and have acquired pertinent names during their seasonal appearances such as: insectograms, scorpions, six-petaled flowers, pictograms, etc. Probably one of the most famous is the Mandelbrot Set--a formation which surfaced in 1991--a perfect representation of one of the most complex shapes in mathematics. These intelligent symbols relating to the development of fractal geometry perplexed, intrigued and delighted many.

Each year, the Salisbury Plain in England literally bursts with new circles in new shapes. Many think the strong magnetic energy or ley lines of the area cause the formations to occur. Whatever they are, the crop circles have so far defied scientific explanation. They have continually reinvented themselves in order, it seems, to provoke scientific inquiry. The vast intelligence that appears to have a need to communicate with human beings--to express itself in strange and spectacular ways--has become more talkative, carving ever more incredible signs in the fields of the world.

The formations often appear in the same locations annually; however, their shapes change year to year. Each one holds a different meaning; each one carries a different energy frequency. The vast crop "circles" range from triangles to circles, to ellipses, to undulating lines, to highly complex interrelated forms. Like unknown glyphs from some forgotten language they express themselves to all and on the surface reveal little more than their beauty. The Center's work with crop circles has helped us understand that they have been formed by a higher intelligence with whom we cannot yet communicate because we do not have the proper tools or codes. Traditional forms of "knowing" will not connect the observer to their meaning. Profound understanding about the crop circles can only be derived from experiential events. The knowledge that they hold can only be accessed by aligning the body, mind and spirit. This alignment is also one of the goals of Qigong practice.

Some believe these formations are made by sound. Some believe energy vortexes are at work in the fields during certain atmospheric summer conditions. Still others believe they are caused by forces beyond our current comprehension and relate to multidimensional worlds. The symbols themselves can take up many acres of a farmer's land. Based on firsthand examination of the circles by the Center's students, within the formations, the crops appear to be pushed down by somekind of gentle force which has the capacity to create complex patterns of bent vegetation. In authentic circles, this bent vegetation is not broken or damaged and in many instances continues to grow.

While crop circles are being studied by numerous groups-scientific, religious, military, etc.,--there has been little, if any, study of this phenomenon from an energy perspective. The trips to England have helped the American Taoist Healing Center come to the conclusion that crop circles offer tremendous healing energy to be tapped into. Over time, from an energy way, there is the possibility that the right frequency can be reached which will make the connection with the valuable information that resides there. The Center believes it is essential to look into this unique phenomenon from an energy standpoint. Using the scientific mind to understand energy prevents a much deeper connection from being made. The phenomenon needs to be experienced... felt... approached... and appreciated through intuition rather than logic. Results of Center studies to date have been productive, with one particular set of healing movements coming form this work.

How so we integrate this mysterious natural phenomenon into our lives? How should we interpret these messages from the universe? What significance do they hold for humanity? The Center believes that crop circles are like treasure chests--each holding unique and important information for healing. The journey is one of discovery. Perhaps one of Shakespeare's characters offers a perspective on how to regard these cosmic enigmas. He pleads with his friend to open his mind because: "There are more things in heaven and earth than are dreamt of in your philosophy, Horatio." So too, it might be useful to apply this kind of openhearted approach to crop circles.

--Volume1, No. 3 Tao in Your Daily Life p.3 reproduced with permission from:

Every time I see a cop circle like this, it resonates within my Spirit. I always believed that we are being  sub-consciously encouraged by these phenomenon's .

This reminds me to have a look at the crop cirlce connector to see what's up there, lol! AND that it might be interesting to actively 'WORK with these mandalas ... will give this another thought!