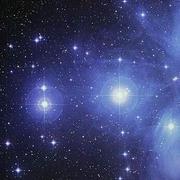 All Early Civilizations have had a notion of the Pleiades. American Natives count on them as their Ancestors. What make this star constellation so special?
In this group we will explore the Realms of the Pleiades - WELCOME! What are the Pleiades?

"The beautiful group of stars known as the Pleiades is mentioned three times in Scripture. Job 9:8-9 and Amos 5:8 explain their origin, stating that the Creator 'stretches out the heavens' and is the Master of the Pleiades. Job 38:31-32 further declares that only the Lord can 'bind the beautiful Pleiades' and bring them forth in their season. These stars are indeed gravitationally bound together in a cluster. They appear in the November skies and are located above Orion's left shoulder, where six icy-blue stars can be seen in the shape of a little dipper, smaller than the moon. Binoculars reveal dozens of additional stars in the Pleiades group. The stars are 400 light-years away but are actually near-neighbors of earth in the Milky Way galaxy.

"The Pleiades stars have been described in many different ways. Chinese records from 2357 BC describe them as golden bees or flying pigeons. The Greeks named the stars the 'seven sisters.' Early Russian literature pictures the Pleiades as a mother hen with her chicks. For a while during the 1800s, it was thought that the Pleiades were located at the exact center of the universe since measurements seemed to show that all the other stars moved around Pleiades. Today we know that the Pleiades group also moves; it is actually speeding away from the earth at 16,000 miles per hour."

"It consists of a number of stars (in the neck of Taurus) which appear to be near together. The brightest of them...has come down to us with an Arabic name--Al Cyone, which means the centre, and has given the idea to some astronomers that it is the centre of the whole universe. The Syriac name for the Pleiades is Succoth, which means booths." 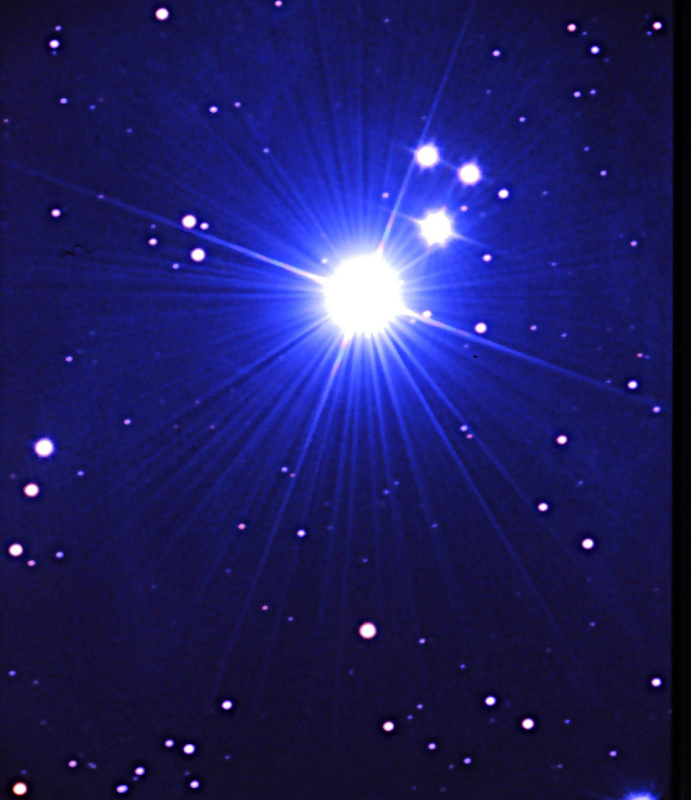 AlKyone - brightest Star of the Pleiades


"The Pleiades...compared by the Persian poets to a bouquet formed of jewels. It is the constellation of seven stars, whose rising and setting determined the commencement and end of their voyages..."


"If a star map is superimposed over the Earth with the pole star placed over the terrestial North Pole, we have a celestial clock making one revolution daily. The noon point of that map (like Greenwich) is the Great Pyramid of Giza. Thousands of years ago, Egypt was known as the Land of Khem. The Khema were a group of seven major stars (in the constellation of Taurus), known today as the Pleiades. If the map is placed with the Khema over the Land of Khem (Egypt)-specifically, directly over the apex of the Great Pyramid- then Taurus falls over the Taurus Mountains of southern Turkey; Ursa Major, the Great Bear, rambles over Russia; the head of Draco the Dragon coils up over China; Orion (the warrior) over Iran/Iraq; Aries the Ram over Rome, and Capricorn (identified with the god Pan) falls over Panama, Panuco, and Mayapan (the old name of the Yucatan). Aquila the Eagle spans the United States. The analogies are obvious, and quite impressive. This is one of the clearest examples of the law of 'As Above, So Below.'" 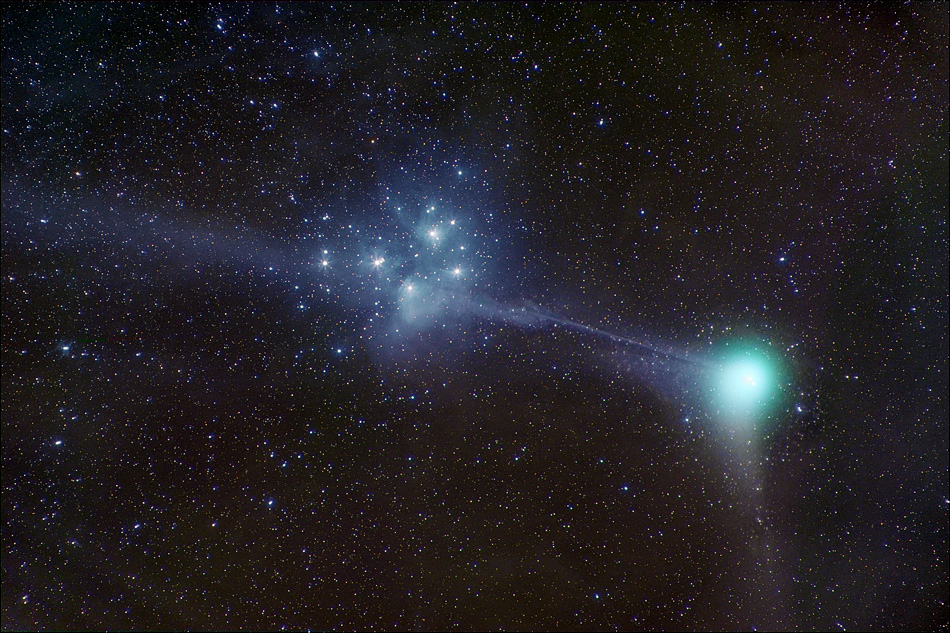 The Pleiades, also known as the "Seven Sisters", is the most famous of all star clusters. The group is very conspicuous, and has been known and regarded with reverence since early times. It was first mentioned by the Chinese in their annals of about 2300 BC, but the earliest European references are somewhat later, in a poem by Hesiod about 1000 BC and in Homer's Odyssey.

The myth tells that the Pleiades where seven nymphs, which were saved by Zeus from the pursuit by the giant Orion, by being transformed into a group of doves and placed among the stars. And in the heavens, to this day, Orion still chases the Pleiades across the sky.

The Pleiades, also known as the
Seven Sisters and M45.
Joe Roberts [larger image]
To a casual glance, the Pleiades appear as a misty patch, but good eyesight reveals six or seven individual stars and some observers with exceptional eyesight have recorded ten or more under excellent conditions. In all, twenty Pleiads shine at sixth magnitude or brighter, although some are too close to other stars to be resolvable without optical aid. On the next night, try your luck at Pleiades stalking and see how many you can count.

Binoculars and small telescopes bring many more stars into view, covering about one degree of the sky. At least 300 stars are members of the group which lies 400 light years away. The cluster makes its best impression with low-power wide-field type instruments. High powers are absolutely useless on such an object, because the impression of a cluster will be totally lost if only one star can be seen in the field at a time.

Under very clear conditions, some hint of nebulosity may be seen around 4th-magnitude Merope, and this shows up well in long-exposure photographs like the one above. The nebulosity was once thought to be the remnants of the interstellar cloud from which the stars of the cluster formed, but more recent research suggests it's an unrelated cloud into which the cluster has drifted by chance.

To receive REGULAR channeled messages from the Pleiades and the Order of Melchizedek, join https://lightgrid.ning.com/group/melchizedek-pleiadian-light-network or check out Anrita Melchizedek's site at http://www.pleiadianlight.net/

Spliting Away From Sepatation & Entering Into Divine Oneness By Christine Day

...Spliting Away From Sepatation & Entering Into Divine Oneness By…Continue

Christine Day & The Pleiadians Messages For May 2021

Physical Ascension Preparation: Building The Heart Muscle By Christine Day & The Pleiadians Human beings say that they want to remember-to know their path, and to find out why they are here and…Continue

Christine Day & The Pleiadians Message for May 2020

Christine Day & The Pleiadians Message for May 2020Christine's…Continue

Frequency Patterning For Your Immune System From Christine Day & The Pleiadians

You need to be a member of Pleiadian Connection to add comments!

Comment by Steve Hutchinson, Admin. on July 29, 2021 at 10:26am
Join Christine Day & the Pleiadians in connecting and aligning with your Sacred Heart Space, (your heart chakra & Higher Heart Chakra) in her powerful July 2021 transmission and broadcast.
...
Infinite Blessings of Christ Love, Enlightenment, Infinity Healing, Violet Flames, & Divine Peace, Joy, & Abundnace that are Divinely Perfect for Each of You in Every Moment ! Thanks for the video...

Dear brother  Steve,
thanks for this video !

A Message... - The Pleiades from Giancarlo Giacomeli on Vimeo.

PRESERVATION OF PLANET AND PEOPLE