Persephone and her Mother Demeter

I am happy to share the myth of Persephone and the most important meaning of Elysis
the sacred site , fourteen miles from Athene
on theway to Delphi.
It is written by Paul Broadhurst and is part of of a chapter of one of most known books and reseachers of the earth energy lines and sacred sites

the magnifique and beautiful written book Dance of the Dragon
that describes a ten year journey and pilgrimage
of Hamish Miller and Paul and two other companions
and the detecting of the Athena and Apollo ley line
Europe' most important energy axis
and that runs from Skellig Michael to the most holy mountain of Carmel
in Israel, the mountain of the Prophets.

I am Nature, the universal Mother,
Mistress of all the elements, primordial child of time,
Sovereign of all things spiritual, queen of the dead,
Queen of the Immortals
The single manifestation of all gods and goddesses that are.

My nod governs the shining heights of Heaven,
the wholesome sea-breezes, the lamentable silences of the world below.

Though I am worshipped in many aspects,
Known by countless names,
And propiated with all manner of different rites
yet the whole earth venerates me.

Two thousand years ago, pilgrims approaching the great Sanctuary of the Mysteries at Eleusis would have been filled with piety and wonder, perhaps themselves aspiring to undergo
Initiation into the secrets of Life itself.

These days, the pilgrim is lucky if the site of the sanctuary can even be found.
Most people, it seems, have no wish to go there. And who can blame them?
Unless one was aware of the extraordinary significance of the place in ancient times, one could easily be forgiven for avoiding this rapidly expanding industrial town with its petro-chemical, cement and steel works.

On our arrival the site of the Sanctuary of Demeter was closed, and all we could do was gaze at the forlorn ruins on the other side of the locked gates.
Dowsing along the street outside we found Apollo pointing through the gates,
Towards a low rocky hill under which was a cave.

By the next morning, the mood had changed, and the rain-washed ruins smelled of fragrant herbs growing in wild clumps amongst the worn stones. We were the first visitors of the day, and were glad of it, for it gave us a chance to follow the current through the ruins in a leisurely manner, pausing to savour the stillness and meditate on the one-time critical importance of this place in the Mystery tradition of the ancient world.

Apollo passed through the gaping mouth of the shallow cave, cut with niches and with a fig tree growing from the rock. Constructed on the edge was a small rectangular heavily built temple - the Plutonium – where the initiate was taken to the portals of the underworld. Close by was a deep hole, looking something like a well, leading down into the rock.

Like the opening beneath the Temple of Apollo at Delphi, there was no mention of this in the official literature, but to us it looked as if an underground chamber existed here which was probably a crucial part of the ritual proceedings.

Perhaps inititates were lowered down into this chamber, as they were at the Necrmanteion of Ephyra, so closely associated with Hades.

The two sites share a common myth, for it was Hades who stole Persephone, the daughter of Demeter, carrying her off to the underworld, before Zeus ordered her release. Henceforth, she was to spend six months there and the rest of the year above ground, where she brought forth the spring flowers and summer crops.

The myth of the Goddess of Nature, the divine force behind birth, death and regeneration, comes down from remote prehistory, and was the centre of a Mystery Cult at Eleusis as early as 15OO BC. For two thousand years the Eleusinian Mysteries were the most important rites of the Greek world, where the Goddess of the wheat and corn of Isis, “the Goddess of a thousand names” of Plutarch presided over the eternal rhytms of Nature.

The mass pilgrimages to her shrine at Eleusis took placein the autumn around September 27 ( very close to Michaelmas), as thanksgiving for her bounty, accompanied by joyful celebrations of the eternal cycle of Life and Death.
Anyone could be initiated, whatever their station in life, as long as they spoke Greek and were not murderers.

Walking along the Sacred Way from Athens is a single day, they arrived at Eleusis in gathering darkness, wher they were mocked in a carnival-like atmosphere to strip them of any false dignity. They were then led in a torchlight procession to the Hall of Initiation, or Telesterion, where they underwent the secret ceremonies that included the displaying of certain sacred objects that were carried in a basket.

The power of these rites sustained the ancient world, and initiates were granted mystical illumination making the Rites of Eleusis the high point of their lives. These rites and ceremonies had an extraordinary effect on those who underwent them, and were jealously guarded to such a degree that no-one ever revealed exactly what they were, on pain of death – or perhaps even worse the retribution of the Goddess.

Thus the exact nature of the rites will never be known, but from contemporary comments we can conclude that they involved the initiatory death and rebirth of the individual which forever changed their perceptions.

Did the Goddess herself appear at the height of the dramatic ceremonial?
Aeschylous was almost lynched by the crowd when he came close to revealing certain aspects on stage, and others were condemned to death in absentia for parodying the secrets.
Pindar, one of the many thousands who experienced the Eleusinian Mysteries at first hand, recorded that anyone who had ‘ seen the holy things and goes in death beneath the earth is happy, for he knows life’s end and he knows the new divine beginning’.

According to the myth, Hades, Zeus’ brother, was master of the underworld and personified the riches within the Earth, the metals and minerals and the ineffable power to make things grow.
He rule alone, until he became bewitched by Persephone ( or Kore, meaning maiden), the daughter of the harvest Goddess Demeter.

When asked for her hand in marriage, Demeter was distraught at the prospect of her daughter leaving the sunny uplands for the dark underworld and refused; but while Persephone was picking a particularly beautiful narcissus, the earth gaped open and Hades appeared in his chariot, snatching her and carrying her off screaming to his underworld domain.

Unable to discover where Persephone had gone, Demeter searched the earth frantically, pausing neither to eat nor drink. At last, Helios the Sun God, who sees everything, told her what had happened, and that Zeus had approved the abduction.
Demeter swore to forsake the immortals, and disguised as a beggar woman wandered from town to town until she came to Eleusis in Attica.

Without Persephone, the world had become a wasteland where nothing grew, crops withered and trees died. The starving people cried out to Zeus, and he agreed that if Demeter would bring the life force back, he would plead with Hades to let Persephone go.

Hades, pitying the wretched inhabitants of the earth, agreed, but gave Persephone a last gift,
A pomegranate. She ate a single seed, which magically bound her to the underworld, despite her agreed release. Zeus pondered the seemingly intractable problem, and found the solution:
For six months Persephone would rule the Underworld as Hades ‘ Queen of the shadowlands, for the other six months she would bring spring and summer to the fructuous Earth.

Thus the cycle pattern of the seasons was established, and maintained, by their mutual agreement. Demeter also taught Triptolemos, the son of the King of Eleusis, the skills of farming, giving him a bag of seed-corn and a plough, and sent him all over the world in a dragon chariot to teach agriculture to humanity. 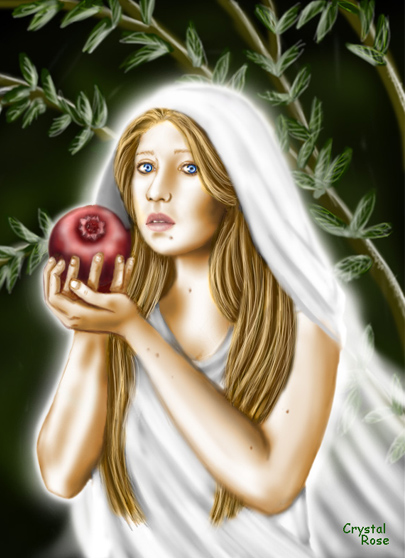 For all interested, there's a discussion on this topic in our group on the POWER of the Divine Feminine: THE DIVINE MOTHER AND THE VEIL OF DEATH - The Mysteries of Eleusis 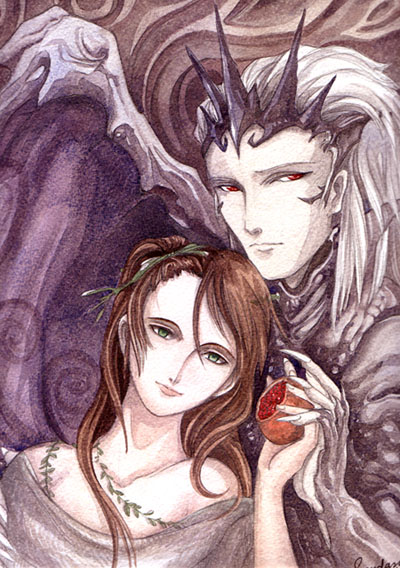