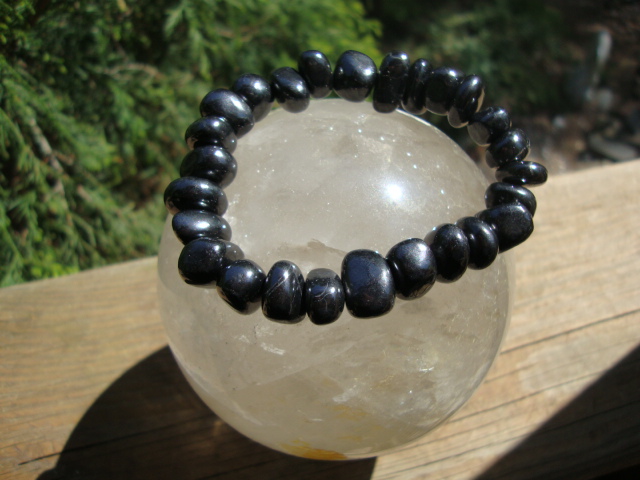 The universe and a dear wizard friend opened the door to these healing stones and I am thankful for their presence and gifts. As with all the stones sent my way, I work with their energies first before I present them on Website for sale. I always check to make sure they are aligned with the highest light and healing. I have worked with this very special stone for about 13 days now and find its healing abilities unlimited. I am not one to give my power away to anything of earth but I can truly say the sacred geometries within these stones live in a place of ‘deep healing’ if one is strong enough to embrace that healing.

"Shungite cures, rescues, purifies, heals, protects, normalizes, restores and even stimulates growth. It kills and devours anything that harms people and other living beings, and restores all that is good.

Shungite is ancient stone almost older than dirt itself. It is around 2 billion years old. Shungite is an extraordinarily encouraging and hopeful stone which brings a variety of blessings. It is the only known natural material known to contain fullerenes, which are powerful anti-oxidants. Fullerenes, (also called buckyballs) look like soccer balls. They are molecular hexagons and pentagons bound together in a hollow cage or tube. They were named after the noted architect, Buckminster Fuller because they follow the same architectural pattern as his geodesic domes.

Fullerenes were brought to our attention when research on them gained scientists a Nobel Prize. There has been dedicated research done on fullerenes. The scientists doing this research won the Noble prize as their work was so important to mankind. Fullerenes are powerful anti-oxidants and their occurrence in this stone seems to be no accident. Shungite has strong healing qualities and will help neutralize any organism within your body that is harmful to you. This is a remarkable stone and valuable for a healthy existence.

The energy embodied within this ancient stone is said to absorb and eliminate anything that is a health hazard to human life. It is said to infuse the auric field with light, Its ancient energy providing psychic protection. Shungite allows only positive and beneficial energy in the energy field. Many scientists believe that electromagnetic radiation is responsible for a high percentage of heart disease and cancer. Shungite exhibits unique shielding effect for harmful electromagnetic radiation of any source like computers, microwave ovens, TVs, cell phones etc.

Shungite will remove bacteria (and other microbes), nitrates, heavy metals, pesticides, volatile organics, chlorine, and fluoride. Its ability to cleanse water goes far beyond carbon filtration as demonstrated by the water near the shungite deposit in Russia. Water from the lake can be used today for drinking without any prior treatment—the result of thousands of years of interaction with shungite. Shungite is said to act like a shield against disease. There have been vast improvements in those with chronic diseases. It can help to regenerate the body. Researches of Shungite have shown that direct contact with the stone on the body relieves pain.

Russian Tsar, Peter the Great, supplied a piece of shungite to each of his troops to purify their drinking water. History records that when an epidemic of dysentery broke out during the Battle of Poltava between Russia and Sweden, the Swedish forces weakened by dysentery without clean water, lost the war of 1709.

Fullerenes will clean water then infuse it with a potent healing vibration. The energy embodied within this ancient stone both absorbs and then eliminates anything that is a health hazard to human life. It is said to aid those who read the future and will help to emphasize the gift of prophecy. The only other known natural source for Fullerenes is in meteorites.

Where can you purchase this stone?

Gillian Macbeth Louthan can answer you....

THE SOUL IS A DROP IN THE VAST OCEAN OF BEING