Ascension Of Our Planet Mother Earth....A Message By Sanandas Eagles.... 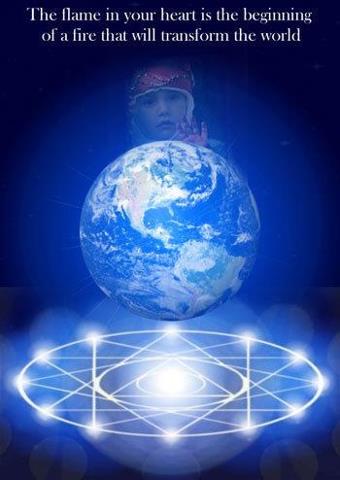 For those who don't participate in the trinity meditation, see below a recap of selected remarks from Sananda and Ashtar regarding the subject. I've added extra information from another source, related to the subject.

1. [Ashtar / January 23, 2012] "Balance, balance, balance. That is the keyword for your year of 2012, and that is what we are striving for in these meditations. There are many events that bring imbalance to your world and the planetary grids: physical earthchanges, solar wind activity, chaos within aspects of your consciousness, and most of all the energy of fear. So these are the types of events we are working with to bring more balance, for only then can the overlay of the Crystalline Grid anchor within the matrix for the New Earth and all her many lifeforms. So although the three segments of these meditations you are asked to do may seem unrelated to each other, it is these grids that are most in need of balance at the time."

My interpretation is:
- The Crystalline Grid = The 4th dimensional (or higher) space/time continuum
- The matrix of the New Earth = The physical reality of the Earth, which is ready to ascend to the 4th dimension

Ashtar stresses the need to constantly create balance, not only within and between the grids through the meditations, but also within our lives and everywhere, for it is a condition for the ascension to take place.

2. [Ashtar / March 12, 2012] "For the next five minutes, you are asked to send Love to the core of the Earth herself, easing her pathway as she shakes off the shackles of her third density form." ... "The solar emissions greatly affect your emotional and physical bodies, while your mental bodies are being affected by the chaos you observe going on in your world as the dominoes fall and structures crumble." ... "You are well on your way, my brothers and sister, and we of the various space Commands as well as Lord Sananda and your Ascended Masters stand beside you and do, indeed, work hand in hand with you to bring about yours and Earth's ascension. What is seen by you to be your `future' is so bright, my beloved ones! Do not wait for some `future' event or time to take you into your joy. It is done NOW!"

3. [Sananda / April 9, 2012] "For your next meditation, I invite you to join with me atop the brilliant White Christ Consciousness Grid. Then connect to me, heart to heart, and begin to pull from the Grid unto your self the Divine Energies of Peace, Resurrection and Hope." ... "Lastly, we are going to send these same Divine Energies to the heart of Mother Earth, fortifying her and supporting her as she continues the ascension into her New Birth."

4. [Ashtar / April 22, 2012] "I tell you that the day is fast approaching when all mankind will re-evaluate their connection and oneness with the Earth, and there will be much more to it than simply planting a tree; there will be a great reverence and great awe as the planet settles into her Divine place within the cosmos."
"So many of you turn for guidance to Light Beings that you term to be `out there' somewhere, whether it be the space brotherhood or the Ascended Masters, when in reality you are living on one of the greatest Light Beings in the cosmos."

Remember that it was in the channeling on August 31, 2005 through Debbie that Gay-Ah'-mah gave a cry of distress "I Am Dying". She now is ready to ascend.

6. [Ashtar / August 13, 2012] "This group has and is doing a remarkable job through the ongoing meditations, and I say `ongoing' because although the grids are now in place, it is our task to keep them in a balanced condition in order to receive the overlay of the Crystalline Grid at the end of your calendar year."

My interpretation: Mother Earth will ascend to the 4th dimension at the end of this year.

8. Our Milky Way spins around her Great Central Sun. One cycle is circa 216 million years (the Galactic Cycle). In fact this Great Central Sun is a black hole / white hole combination, which connects our galaxy (with a black hole in it's center), with an twin galaxy in a parallel universe (with a white hole in it's center), which has an opposite polarity. An enormous amount of x- and gamma energy is radiated out of the black hole of our galaxy, coming from the white hole of our twin galaxy, which is many times more and stronger than the radiation from the quasars. This energy too is non-polarized scalar electromagnetic radiation, although from another type than that of the quasers. The radiation is within a field perpendicular to the plane of the Milky Way. It is known as the 'foton belt'. Every starsystem of the Milky Way goes through this belt every circa 108 million years. This transit takes circa 150 years and it is called the Galactic Shift. The
Galactic Shift too is a catalyst to ascend to a higher dimension. This protractic exposure of scalar electromagnetic radiation during the Galactic Shift is a major factor in the radical transformation and transmution of the Earth and all her life forms. Because of the disappearence of polarity in this field, an EM null zone is created, and it is in this EM null zone that a portal towards a higher dimension is opened. Our solar system has entered the foton belt in 1950, and is already experiencing this radiation, which increases as we are penetrating the belt deeper. In the 20 year period circa 2015-2035 we will experience the maximum radiation. So we are almost there. However,on the 3 days of December 20-22, 2012 we will experience the radiation of BOTH the precessional alignment AND the Galactic Shift (at an almost maximum radiation level) COMBINED.

My interpretation: It is this combination of radiation which will create a portal opening and make it possible for the Earth to ascend towards the 4th dimension in the period December 20-22, 2012. And it is in this 3 day period that ascensions will take place within humanity, that is, THOSE WHO ARE READY.

Mother Earth is ready. Are we ready? (-:

NOTE
The same phenomenon that a portal is opened within an EM null zone as described in the macrocosmos, is also true within the microcosmos when we are doing silent meditations. As above, so below. Those who are able to keep their mind perfectly still for a sufficient period of time, are creating such an EM null zone, and they will experience the opening of a portal to a higher dimension. And if they are ready, they will ascend. The cosmic conditions in the times we are living in makes it very favourable for this to happen.

SKEINS OF LIGHT:- The nature of God as consciousness is realized in the infinite frequencies of both the spiritual and the material cosmos in aspects of God self-awareness infinitely diversifies, infinitely unified. Therefore, if you could dial…