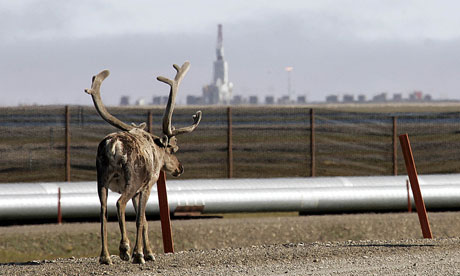 Caribou near a BP oil pipeline in Alaska. The oil giant was fined and put on probation over a spill from corroded pipes in 2006. Photograph: Al Grillo/AP


BP is facing new fines in connection with its criminal conviction for a huge oil spill on Alaska's North Slope in 2006.

Federal probation officer Mary Frances Barnes argued in an Anchorage federal court yesterday that a second spill in Alaska in November last year constituted a violation of its probation.

In 2006, a corroded pipeline leaked 200,000 gallons of oil on to the tundra in the worst leak in the history of the North Slope. The company was sentenced to three years' probation and ordered to pay $20m (£12.5m) in criminal penalties and restitution.

The leak in 2009 occurred when a pipeline at the BP-operated Lisburne oil field burst, leaking nearly 46,000 gallons of crude and oily water near Prudhoe Bay, Alaska.

Investigators said BP operators had "failed to respond to the alarms and failed to investigate or troubleshoot the cause of the alarms" and argued that BP should have known better, as it had suffered a similar ruptures in other frozen pipelines as far back as 2001.

Among other things, the company argued, it had replaced corroded transit pipelines with new lines at a cost of $500m.

Still, the ruling will only increase scrutiny of the British firm, which recently estimated that the more recent Deepwater Horizon spill in the Gulf of Mexico this summer would end up costing it $40bn.

Earlier this month, the investigative journal ProPublica revealed that BP's own internal maintenance reports had documented that at least 148 its pipelines on the North Slope received an "F-rank" because of corrosion. According to one welder, some of BP's pipes "have hundreds of patches on them."

After that report was published, a BP spokesman explained that an "F" ranking does not imply that an accident is imminent. "It does prompt a higher priority repair plan depending on technical details and engineering review," Rinehart said.

The latest report will add to pressure on the company: in addition to costs relating the Gulf of Mexico spill, it was fined $50m in August over a 2005 refinery explosion in Texas City that killed 15 people and injured 170.

But the latest ruling is unlikely to affect the firm's Alaskan operations, which the company plans to sell as part of a $30bn programme to raise money to meet costs relating to Deepwater Horizon spill.

BP said it will respond to the government's legal filings at a hearing on December 20.