God and Goddess Meru - and their retreat above Lake Titicaca

The God and Goddess Meru

God Meru and the Goddess Aramu are the authority of the Andes Mountains of South America and guardians of the Feminine
Ray to the Earth. Many of us know Lord Meru as one of the great teachers
of Lemuria and who, before the demise of the land of MU, brought many
of the sacred scrolls along with the Golden Sun Disc to South America.
Their action is illumination and serve from the Temple of Illumination
located over Lake Titicaca on the Peru-Bolivia border. There are many
classrooms and council chambers that contain records of the ancient
civilizations as well as the Divine Plan for the incoming seventh root
race.  You are invited to come here during sleep to bathe in the
illumination flame and to receive the Greater Knowledge of the unfolding
Divine Plan for Earth.

". . . These Spirit Sparks (God Flames of Individualizations of the Presence Who proclaimed "I AM" - ARC editor) are directed by the Father-Mother God of the System - Helios and Vesta -
into Universal Light, projecting a glorious Immortal Three-fold Flame.
Around It, there is a great White Fire Being, from which are projected
forth the Two Divine Complements - male and female - all still in the
realm of perfection. These two Divine Complements, (Twin Flames -
ARC ed.) as They dwell in that Realm of Perfection, have free will and
they can choose to descend through the entire Seven Spheres where
Perfection exists, lingering as long as they desire, in each of the
Spheres, and assimilate as much of the instruction as they desire.


The God and Goddess Meru, whose retreat is above Lake Titicaca, are the manus for the sixth root race.

This is the most recent soul pattern, destined to outpicture the fullness
of God's sixth purple and gold ray that anchors the qualities of ministration
and service. These great masters of illumination anchor the Mother
flame and feminine aspect of God for the entire planet, in their retreat
and through the Andes mountains, creating an arc with the Father energy
ensconced in the Himalayas. That Mother flame flame was withdrawn
from the physical octave when the ancient continent of Lemuria sank
beneath the Pacific ocean. They teach that God does not condemn, but
that the fallen ones do. They urge us to overcome self-condemnation
in all of its forms, lest we condemn our souls out of existence. They
also urge us to refrain from negatively competing with others, and
explain this spiritual point of vulnerability brought down the Incan
civilization. They remind us that God is a consuming fire fully able
to dissolve and transmute sin. . 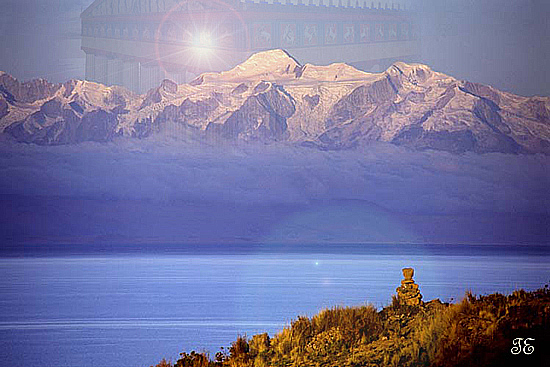 Over Lake Titicaca lies the Temple of Illumination, the retreat of the God and Goddess Meru. In this beautiful white and gold Atlantean temple
graced with columns, the feminine ray of Omega is anchored for the planet.
The retreat is symbolized by a golden sun where the golden pink glow
ray of God’s loving wisdom shines forth. Here are many classrooms
and council chambers that contain the records of ancient civilizations
as well as the divine plan for the incoming seventh root race. Students
are invited to come here during sleep to bask in the glow of illumination’s
flame and to learn how to become teachers of mankind. they are also
invited to participate in a plan of cooperation between children, families
and communities, whereby children are educated in the Word and the sacred
heart, whereby parents, teachers and sponsors of children work together
in community action and responsible citizenship, and whereby the music
of the spheres is invoked to break down the forces of chaos.

Here I AM: Dorothy Lee Fulton, Messenger of Music

Read
about a student of Mark and Elizabeth who was chosen by Mother Mary to
become Messenger of Music. Enjoy the many heartwarming miracles as
Dorothy Lee works with Mark and Elizabeth, and meets Jesus, Maitreya and
many other masters in her training to become the anchor point for the
music of the spheres.
by Dorothy Lee Fulton

Call to attend the Temple of Illumination

In the name of the Christ, My Own Real Self, I call to the Heart of my Mighty I AM Presence, to the Angel of the Presence, to Beloved Archangel
Michael, Kuan Yin and the Maha Chohan, to take me to the etheric retreat
of the God and Goddess Meru over Lake Titicaca in the Andes Mountain
on the border of Bolivia and Peru, according to the will of my Holy
Christ Self and the direction of the Maha Chohan. I ask to be instructed
on the Word and the sacred heart, on community action and responsible
citizenship, and on the music of the spheres, for the saving of children
worldwide and for the sponsorship of the seventh root race.

Beloved
God and Goddess Meru, help me to remember upon awakening all that will
help me to fulfill my mission on earth and the mission of my twin flame.
I accept this call manifested through the power of the Christ and am
thankful for its realization. In the name of the Father, the Son, the
Holy Spirit and the Divine Mother, Amen.

The God and Goddess Meru also sponsor the Christed education of children and youth through methods of advanced learning that accelerate the innate potential of every child, starting in the womb. They have revealed an eightfold plan for the rescue of the youth that involves

1.  education upon the word and the sacred heart manifest as a firm foundation in reading,      writing and arithmetic.

3. cooperation between parents, teachers and sponsors of children working together in      community

4.  daily prayers on behalf of the youth of the world

5.  community building and services that strengthens families and reinforces values

7.  establishing harmonious music in the home patterned after the music of the spheres

8.  reinforcing individuality by sharing with young people the example of saints, heroes and      positive role models, thereby diminishing the dangers of peer pressure, which is an emotional interdependence among teenagers that seeks to compensate for a lack of parental involvement

For more informaion, follow he links below:
The 12th Gate of the Golden Sun Disc - The importance of Lake Titicaca
Lake Titicaca-Sacred Bolivia
Legend of Lake Titicaca and the Lemurian Solar Disc
ETAE, Arhcaeon Haniel's and Lady Radiance's EARTH RETREAT in the ethers of PUNO, north / north-east of Lake Titicaca in Peru

One group member saw a rose red color appear and many beings with it that had several faces and then the sense of energy of a rose flowing from the chest. The Brother/Sisterhood of the Seven Rays is the order of the Red Rose, and Lord Meru usually shows up with the whole group of beings. They usually send energy out from their heart. Another group member said "When I first close my eyes to tune in, I saw this little, red light. I normally see a white light coming towards me. This one was a ruby colored, red light coming toward me." Yes . . . that is the order of The Brother/Sisterhood of the Seven Rays.

Then another group member went even deeper into the energy. She said "When I closed my eyes, I saw hallways, and there were doors, and arches. It appeared not like a trail, but a way to go. Then there were very big faces, and I kept asking what their names were, and I got 'It doesn't matter. You won't remember anyway.' (P.S. The Andean Masters, along with the Star Elders, do not like to have individual names as it promotes separation.) Then I took a break, and I listened to what Aluna was saying, and then again closed my eyes. Then they took me to a different structure, but there more big arches, and green doors that were open, so we could get through them. And they told me that I was home."

There is one rare book that talks about Lord Meru. It is called "Secret of the Andes" by Brother Philip. order SECRET OF THE ANDES

The first 75 pages of the book are really right on, and then after that, something happens, and the guy that was channeling lost his connection or something, because it changed. It was clear that something else influenced him, and it wasn't as clear. But the first 75 pages are awesome. They talk about The Order of the Red Rose. 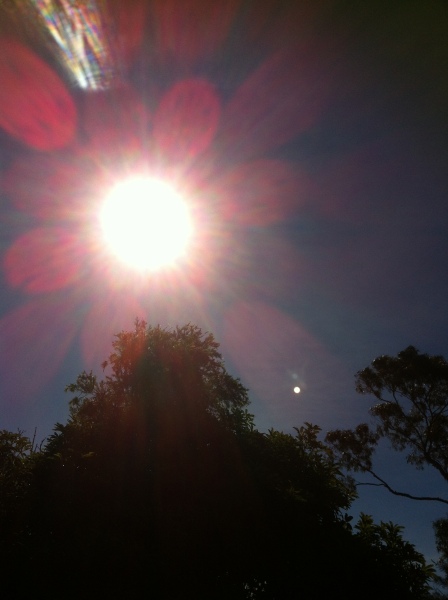 It all came together :-)

You are so beautifully guided, Kerrie - what a gift!