The Hawaiian Prophecies and Medaillion * Secrets in Plain Sight

this morning I viewed part of an amazing video

illuminations of many of sacred  secrets

yesterday I did receive a letter email

of a hawaiian friend

sharing on all kind of things

and at last of her letter was this writing

that she shared with us while sharing on poems

it's an ancient medaillion with sacred symbols and language

that was rediscovered some time ago in a berlin museum

if I remember it correctly

THEN someone posted this image , which is similar to the Hawaitinui Medallion so I shared this:
The late Kai Kalama is also the person who introduced me to the collection of books -"
Life and teachings of the masters of the far east",
which mention Hawai`i and the "Basis of coming social reorganization".

I was more than amazed

of the united nations symbols

they did not put in

the star of david and the dot

that is abundantly shared by scott onstott

it's amazing meanings and significance

in many of our sacred architecture in many nations capital

from this wednesday morning

and big HU to ALL

The Center Dot This is the nucleus, the core, the heart, the focus – the Alpha and Omega where there is no beginning and no end but infinity. This dot is our Nana I Ke Kumu – Nana, meaning to see or look to the source.

The Six-Pointed Star Although at first one may think it is symbolic of the Jewish Star of David, it is not only the jewish symbol.  Historians have found it on artifacts and documents such as the Dead Sea Scrolls throughout the world as far as Japan, China, Tibet, Germany, and all of Polynesia. It is the oldest symbol in the recorded history of Muu or La (e)muria – the sunken continent. The six pointed star is in fact 2 triangles. One pointed to the infinitely big and the other to the infinitely small; the heavens above and the earth below.

The Seven-Pointed Star The seven-pointed star in Hawaiian theology is that each of the seven points, symbolize the duality Maoli Race or race of man – a male and female. Thus, Ke Akua created not just one Adam and Eve, but Seven pairs for a total of 14 peoples. That makes up the entire human race. And according to our ancestors, these are the Maoli Race of 14 that came from the distant star system of the Makali’i or the Pleiades. Now as we stretch out from each of the seven points of the star, the lines symbolizing the eight directions from earth out into the universe. In native numerology, eight is a significant number – Eight is the number of corners of a concave square – a cubic square.

Man, who is the Cubic Square is grounded on earth. All universal energy permeates to and from man from the eight directions of the universe. Thus Mankind is at the core, center, nucleus, at the Nana (source) – both Alpha and Omega / Adam and Eve as the controlling factor of his destiny.

The Vibrating Circle of Rings Like a pebble dropped in a pond, the pebble is as much the cause and effect of the rings that emanate out. However, the vibrating circle of rings are not only the vibrations of Man’s creations, but symbolic of the energy that resonates back from the universe.

The medallion was imprinted on documents written by Hawaiian theologians and later found in Germany in the 1800’s. Within these documents, three Kahuna (high priests) of Hawai’i stated that when these symbols are seen again, the coming of lasting peace would vibrate throughout the earth amongst mankind. 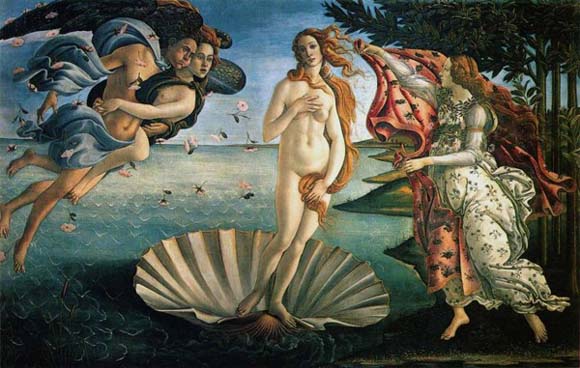 The picture of Aphrodite

appearing  on front of secrets in plain sight  video

this magnificent work of art was painted by Sandro Botticelli.

Its title is The birth of Venus. (Venus was the Roman name for the Greek goddess Aphrodite.)

In Sumeria her name was Inanna

Dirk, wouldn't you like to open up a  group where you can share your blogs and where we can discuss them with all who are interested in such findings?

I would LOVE to see such a group emerge! No idea of what to call it - but I am sure you would find a suiting name!!!

I will watch the video when I have more time. What drew my attention is the BEAUTY of the symbol ... I am looking forward to learning more,