Peace with Elves and a Little Stardust 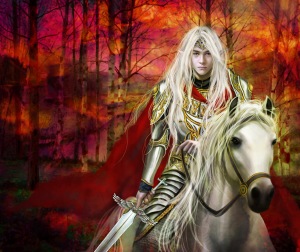 Following the guided meditation by Sjernafina described in the previous post, she acknowledge Talliander, whom is my Elf-self. One of my oldest Gaia incarnations discovered so far.

Talliander has a blue sparkliness and is very full of energy and joy. I was continuing on with allowing these aspects of myself to speak without hindrance, and it's pretty interesting what they have to say (to me at least).

When he first came in, he wanted to play music and dance... I am in the hot tub in sub-freezing weather with people sleeping in the house. That wasn't going to happen... That did not dampen his spirits at all, he just mockingly pretended to play some music for a couple bars instead.

As I mentioned in my previous post, I was pretending to channel live to my chakra class, even though none of them were physically present with me. He told the "class" how he was initially very cautious about joining my merry band of guides (even though he is part of me), because of the distrust with humans, and some of the long buried grief and sorrow he/I went through. But, he said those days are long past and they (elves) are happy that we are entering into the golden age of Gaia where we can share together joyfully once again. He (and other elves) have peaked beyond and know how awesome this is, and they can barely contain themselves.

Talliander called out another elf that was in the "classroom" and said he knows he has a job to do and all, but it's time to celebrate and enjoy this time. He acknowledged that not all elves are so effervescent and can be quite serious sometimes.

Talliander wanted to do his own guided meditation, so he also took the class into a forest. This time we were all in the same forest, which by all intensive purposes, was not magical like the faery realm, but was very much like a forest here where I live. Light was streaming through the trees and it was a beautiful warm day.

As we walked, he pointed out some faeries that were flitting about between flowers, and crossing over the pathway. They were doing their own thing, and he just wanted to point out that faeries are not limited to the faery realm, but are found all over. He mentioned that there were many elves hiding in the trees and challenged us to look for them. He said there is nothing to fear by their hiding, just that they are playing a little game.

Looking around at the trees, you could see a face that would quickly dart back behind a tree. Then you might see a blur of motion as an elf darts to another tree to keep pace with the group.

Up ahead on the path there was a group of elves, on horseback decked out in armor and carrying spears and bows. This is straight out of Lord of the Rings (and probably influences what I see in my visions significantly) and was quite impressive. The leader of this group was in front and we walked up to him about 10-20 feet away.

He said that he was there to acknowledge that elves and humans are at peace once again and that they are, and will, work with us as the golden age blossoms. So even though he was decked out for battle, it was donned as ceremonial gear.

With the conclusion of Talliander's meditation, he acknowledged Luna, my Dragon-self.

When Luna comes in, she is very big and feels so different than faeries, elves and angels. My voice changes and drops in pitch.

She greeted the class and described herself to them.

"I am a Dragon with iridescent white scales and a constant iridescent flame flowing around me. Do not fear for the flames though, as these flames do not burn your human bodies, but rather cleanse and purify them, for it is the ascension flames that I carry with me. The many colors seen in the iridescence you can think of as rainbow colors, but they are far more than a traditional rainbow, for the iridescence represents the infinite color palette of multi-dimensionality and ALL THAT IS. The colors are constantly changing and shifting, but are also subtle such that no one color blocks out another."

"I am here with the one Paul calls 'Obsidian' who is visually opposite of my appearance. He is black as night, but he is not darkness. He is like the night sky and could easily be invisible on a starry night. In actually he is really a very dark purple but most would consider it black. He is also endowed with what looks like tiny diamonds all over his body. These are not diamonds, but are what we will call "star dust" and in the light of day, he sparkles quite beautifully."

"Obsidian and I are like yin and yang, and fit perfectly together. You might think as opposites, but it is more accurate to say complimentary. We are also joined by Ruby and Dharma who are young Dragons learning from us and from this group of guides that surround us. Being young doesn't mean they are not wise, or powerful, for all Dragons are awake and aware of their true nature. Also with us tonight are several dragons that have come to assist in your getting comfortable with Dragon energy. We are all very large and so we shape shift to an appropriate size for the event. In this case, there is a Dragon behind each of you. They are going to blow Dragon Fire into you and shift your energy just a little bit."

"For some, Dragon energy can be overwhelming as it is very powerful, and some may call it "serious." So to lighten up the room, all of the Dragons helping you will shape shift into a bird. Whatever bird you see in your inner vision is the dragon behind you. This Dragon in bird form is now moving in front of you, or onto your shoulder, or wherever is most comfortable for you to meet them. All of these Dragon birds can talk, and they each have something to say to you. Take a moment to listen to their words, and if you want to have a conversation, you may do so."

"These Dragons do not belong to you, but they have volunteered to be with you and speak with you when you wish. You can experience them in Dragon form or in bird form."

"Before we leave you for the night, Gaia Sophia is in the center of the room, and has invited her Golden Dragon to come forward. She is majestic and beautiful, just like her namesake. She radiates love and golden light and fills the room overflowing with her presence. Feel the energy flow into and though your body as it heals and uplifts you."

With that my channeling practice ended and I finished with energy work before retiring for the night.

I really enjoyed it, and without any physical people around, I can do it without feeling self-conscious or "weird." My goal is to get past that awkwardness and just let it happen freely and openly in a live setting. One step at a time...

ok... one of my fav's... Paul I have seen this aspect in many humans, received messages of the Deva Kingdom of the Elemental Realm of "that is one of ours", or they were one of us for a time... just beautiful joys..and have been shown these aspects of self in many, even many around me. We are rife and vast with the Elemental Realm, a beautiful frequency of vibration that has awakened in so many today who were so melded in this Realm for so long and came here for this amazing time..., it is shown and felt when you imprint on their energy!! Love this!! mamafoo

Thanks Mamafoo, it's very fun and enlightening to spend time in these realms. I do wish I could spend more conscious time there, but my body might just go into a coma if I did that too much...

If you liked this one, you might like the next as well, although I didn't run into an elves in that one. :)