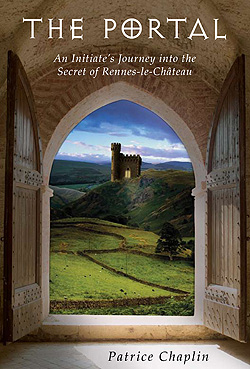 THE PORTAL is the true and startling disclosure of respected British writer Patrice Chaplin’s initiation into the mysteries of Rennes-le-Château. Following in the footsteps of those before her, among them, the famed priest Bérenger Saunière who rose to cult popularity due to modern-day bestsellers such as Holy Blood, Holy Grail and The Da Vinci Code, Patrice embarks upon a secret alchemical pilgrimage involving strict purifications of mind and body and a deadly journey they prepared her for, all of which unveils the sacred and prehistoric purpose of what is now Rennes-le-Château.

PATRICE CHAPLIN is an internationally renowned playwright and author who has published more than 26 books, plays, and short stories. Her most notable work includes Albany Park, Siesta, which was made into a film staring Jodi Foster and Isabella Rossellini, Into the Darkness Laughing, Hidden Star, Night Fishing, and Death Trap. Patrice resides in London.

'Mystical Legends - Girona, A City Of Secrets' from Carrie Kirkpatrick on Vimeo.

New developments surface in Patrice Chaplin's stargate mystery! A group long thought to have been linked to the Vatican or the Habsburgs have now been revealed to include US billionaire Howard Hughes! In the 1930's German medievalist and Grail seeker Otto Rahn brought Hughes to Gerona, Spain. The legendary tycoon came to know of the region's natural stargates, entrances from other dimensions discussed in detail in Patrice's new book The Portal (Quest Books, Sept '10). In the 1960's Hughes sent CIA operatives to ransack private property holding related documents and artifacts. Did Hughes ever find and travel the portal located in the Pyrenees? Did Hughes employ legendary O.T.O member and jet propulsion pioneer Jack Parsons to assist in government projects aimed at creating artificial portals? Were the morbid accounts of the failed Philadelphia Experiment a botched attempt at constructing these artificial portals, or wormholes?

Under the guidance of Jose’s teacher, one of the few true living Kabbalists, Patrice embarked in 2004 to ‘Tread the Seven Stars Under the Great Bear’.

Patrice Chaplin's recent memoir The Portal: An Initiate's Journey into the Secret of Rennes-le-Château details the mysterious pre-Atlantean stargate sought after by Howard Hughes. Picking up where Patrice's previous memoir 'City of Secrets: One Woman’s True-life Journey to the Heart of the Grail Legend' leaves off, 'The Portal' discloses Patrice’s personal journey through this very real stargate.

In 2003 'City of Secrets' was in the process of being published in the UK. Jose Tarres, real-life custodian of the Holy Grail, great friend to remarkable talents such as Salvidor Dali, Jean Cocteau, Umberto Eco and Simone de Beauvoir, and forever the love of Patrice’s life, had suffered a near fatal heart attack. With Jose then in his seventies, the power of death as a silencer threatened the survival of his society’s guarded knowledge.

Patrice had thoroughly researched Jose’s documents and testimony with his permission for the writing of 'City of Secrets'. But upon its completion, Patrice confessed she still did not fully understand the puzzle revolving around the legendary, yet very real, golden cup. “So what was the secret behind the secret?” Patrice asked. With simple resolution, Jose said, “You have to do what they did in every century, the initiates. You have to do the Journey.”

Under the guidance of Jose’s teacher, one of the few true living Kabbalists, Patrice embarked in 2004 to ‘Tread the Seven Stars Under the Great Bear’. Through activating the eleven sacred sites along the French/Catalan border, Patrice journeyed detachment, death, and rebirth. Patrice lived through Mt. Canigou’s great secret, a pre-Atlantean portal, a gateway into other times and dimensions.

Recently Patrice was made aware that 'El Americano', a shadowy figure she had heard in passing since her youth, was in fact the famous playboy adventurer Howard Hughes. Now having traveled the portal herself, Patrice is continually being approached by individuals wishing to offer previously untold pieces to the puzzle. Catalan priests, Freemasons, famous pilots, and even previous NASA employees are seeking Patrice out with vital proof and testimony. The implications are startling, with widespread effects. Stay tuned to Facebook.com/PatriceChaplin for forthcoming evidence.

Praise for The Portal:

A story of love and magic steeped in the truth, a story that will stay with you years after you read the last pages.
—Kathleen McGowan, New York Times best-selling author of The Expected One, The Book of Love , and The Poet Prince

Patrice Chaplin is the first author in decades to add something original to the Rennes-le-Chateau mystery.
No one else has been so involved in the decipherment of a century-old secret that could give a quantum leap in our evolution.
—Javier Sierra, New York Times best-selling author of The Lady in Blue

The Grail mystery: Patrice Chaplin lived it and is conveying its incredible nature to the reader.
—Phillip Coppens, author of Servants of the Grail and The Stone Puzzle of Rosslyn Chapel

PATRICE CHAPLIN, journalist, author and playwright, has written twenty-eight books; her novel Siesta became a film starring Jodie Foster and Isabella Rossellini. As a Bohemian in Paris she spent time with Jean Paul Sartre and Simone de Beauvoir. When married to Charlie Chaplin’s son Michael and working in Hollywood, she collaborated with Lauren Bacall, Miles Davis, and Salvador Dali. She resides in London. Connect with Patrice at http://facebook.com/PatriceChaplin & http://PatriceChaplin.com
Patrice Chaplin interview documentary via Vimeo