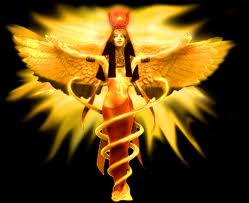 The following texts relates the Isis figure to the Soul. The three Mothers of the soul, as described in “Isis and Madonna” are the Sentient soul (Orektikon), the Intellectual soul (Kinetikon), and the Consciousness soul (Dianoetikon) as seen here.

… Therefore in the true sense of spiritual science we do not speak only of one Mother but of the Mothers, realizing that what we have today as the physical Mother is the last development of the soul-spiritual figure out of the spiritual realm.

There are in fact images of Isis representing not one Mother but Mothers, three Mothers. In front we have a figure, Isis with the Horus child at her breast, resembling the oldest representations of the Madonna. But behind this figure in certain Egyptian representations we have another figure, an Isis, bearing on her head the two familiar cow horns and the wings of the hawk, offering the “Crux Ansata” ☥ to the child. We see that what is physical, human, in the foremost figure is here more spiritualized. Behind there is yet a third figure, bearing a lion’s head and representing the third stage of the human soul. This is how these three Isis figures appear, one behind the other. It is an actual fact that our human soul bears in it three natures — a will nature, found in the inmost depths of the being, a feeling nature and a wisdom nature. These are the three soul Mothers; we meet them in the three figures of the Egyptian Isis.

“I am the All; I am the Past, the Present and the Future. My Veil has no Mortal ever lifted.”

The soul was always known as the “mother” in all esoteric (mystical) teachings; the instructor was the “father.” Father and mother, Osiris and Isis, those are the two forces present in the soul: the instructor, representing the divine which flows directly into man, Osiris, he that is the father; the soul itself, Isis, the one who conceives, receives the divine, the spiritual into itself, she is the mother. During the fifth Root Race the father withdraws. The soul is widowed. Humanity is thrown back onto itself. It must find the light of truth within its own soul in order to act as its own guide. Everything of a soul nature has always been expressed in terms of the feminine. Therefore the feminine element—which exists only in a germinal state today and will later be fully developed—this self-directing feminine principle which is no longer confronted by the divine fructifier, is called by Mani the “Widow.” And therefore he calls himself “Son of the Widow.”

Search for the New Isis, the Divine Sophia :

But the Isis legend must show itself as being fulfilled in another way in our time. We cannot lose the Christ and what he, in a higher form than Osiris, gives us; but we can lose, and we have lost, what is portrayed for our Christian understanding standing at the side of Osiris — Isis — the mother of the Saviour, the divine wisdom, Sophia. If the Isis legend is to be renewed, then it must not simply follow the old form
…
Oh, the soul will attain to altogether new feelings if it feels committed to experience the new Isis legend within modern humanity. Lucifer kills Isis and then places her body into the infinity of space, which has become the grave of Isis, a mathematical abstraction. Then comes the search for Isis, and her discovery, made possible through the inner force of spiritual knowledge.
…
Just as the Egyptians looked from Osiris to Isis, so we must learn to look again to the new Isis, the holy Sophia. Christ will appear again in his spiritual form during the course of the twentieth century, not through the arrival of external events alone, but because human beings find the power represented by the holy Sophia. The modern age has had the tendency to lose this power of Isis, this power of Mary. It has been killed by all that arose with the modern consciousness of humankind. And the confessions have in part exterminated just this view of Mary.

Isis and the Soul:

Isis, when she is purified and has laid aside all that she has received from the physical, is impregnated from the spiritual world and gives birth to Horus, the higher man, who is to be victorious over the lower human being. Thus we see Isis as the representative of the human soul, as that in us which as the divine spiritual is born of the universal Father and has remained within us, seeking Osiris and only finding him through initiation or death. By conjuring this Osiris and Isis saga in a picture before our soul we are looking into the realm that lies behind the physical world of the senses, into a time when man was still among the Mothers, the primordial grounds of existence, when Isis was not yet enclosed in the physical body but still united in the golden age with her spouse Osiris.