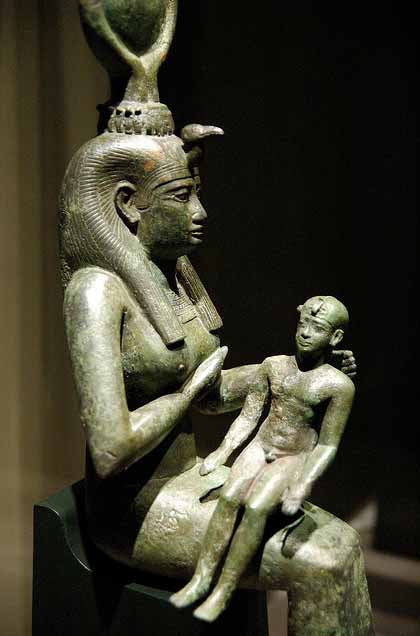 In New Age spirituality, the third eye often symbolizes a state of enlightenment or the evocation of mental images having deeply personal spiritual or psychological significance. The third eye is often associated with religious visions, clairvoyance, the ability to observe chakras and auras, precognition, and out-of-body experiences. People who are claimed to have the capacity to utilize their third eyes are sometimes known as seers

The pineal gland (also called the pineal body, epiphysis cerebri, epiphysis, conarium or the “third eye”) is a small endocrine gland in the vertebrate brain. It produces the serotonin derivative melatonin, a hormone that affects the modulation of wake/sleep patterns and seasonal functions. Its shape resembles a tiny pine cone (hence its name), and it is located near the center of the brain, between the two hemispheres, tucked in a groove where the two rounded thalamic bodies join.

The Eye of Horus is an ancient Egyptian symbol of protection, royal power and good health. The eye is personified in the goddess Wadjet (also written as Wedjat, or “Udjat”, Uadjet, Wedjoyet, Edjo or Uto). It is also known as ”The Eye of Ra”.

The name Wadjet is derived from “wadj” meaning “green”, hence “the green one”, and was known to the Greeks and Romans as “uraeus” from the Egyptian “iaret” meaning “risen one” from the image of a cobra rising up in protection. Wadjet was one of the earliest of Egyptian deities who later became associated with other goddesses such as Bast, Sekhmet, Mut, and Hathor. She was the tutelary deity of Lower Egypt and the major Delta shrine the “per-nu” was under her protection.  Hathor is also depicted with this eye. In one myth, when Set and Horus were fighting for the throne after Osiris’s death, Set gouged out Horus’s left eye. The majority of the eye was restored by either Hathor or Thoth (with the last portion possibly being supplied magically). When Horus’s eye was recovered, he offered it to his father, Osiris, in hopes of restoring his life. Hence, the eye of Horus was often used to symbolise sacrifice, healing, restoration, and protection

There are seven different hieroglyphs used to represent the eye, most commonly “ir.t” in Egyptian, which also has the meaning “to make or do” or “one who does”.[5] In Egyptian myth the eye was not the passive organ of sight but more an agent of action, protection or wrath.

In Ancient Egyptian most fractions were written as the sum of two or more unit fractions (a fraction with 1 as the numerator), with scribes possessing tables of answers (see Rhind Mathematical Papyrus 2/n table). Thus instead of 3/4, one would write 1/2 + 1/4. Arithmetic values represented by parts of the Eye of Horu

Fractions drawn as portions of a square.

Different part of the Eye of Horus were used by the ancient Egyptians to represent one divided by the first six powers of two:[13]

In one myth, when Set and Horus were fighting for the throne after Osiris’s death, Set gouged out Horus’s left eye. The majority of the eye was restored by either Hathor or Thoth (with the last portion possibly being supplied magically). When Horus’s eye was recovered, he offered it to his father, Osiris, in hopes of restoring his life. Hence, the eye of Horus was often used to symbolise sacrifice, healing, restoration, and protection When identified as the protector of Ra, who was also a sun deity associated with heat and fire, she was sometimes said to be able to send fire onto those who might attack, just as the cobra spits poison into the eyes of its enemies.  In this role she was called the Lady of Flame.

Wadjet as Wadjet-Bast, depicted as the body of a woman with a lioness head, wearing the uraeus She later became identified with the war goddess of Lower Egypt, Bast, who acted as another figure symbolic of the nation, consequently becoming Wadjet-Bast. In this role, since Bast was a lioness, Wadjet-Bast was often depicted with a lioness head.

After Lower Egypt had been conquered by Upper Egypt and they were unified, the lioness goddess of Upper Egypt, Sekhmet, was seen as the more powerful of the two warrior goddesses. It was Sekhmet who was seen as the Avenger of Wrongs, and the Scarlet Lady, a reference to blood, as the one with bloodlust. She is depicted with the solar disk and Wadjet, however.

Eventually, Wadjet’s position as patron led to her being identified as the more powerful goddess Mut, whose cult had come to the fore in conjunction with rise of the cult of Amun, and eventually being absorbed into her as the Mut-Wadjet-Bast triad.

When the pairing of deities occurred in later Egyptian myths, since she was linked to the land, after the unification of Lower and Upper Egypt she came to be thought of as the wife of Hapy, a deity of the Nile, which flowed through the land.

Wadjet is not to be confused with the Egyptian demon Apep, who is also represented as a snake in Egyptian mythology.

In some traditions as Hinduism the third eye is supposedly located around the middle of the forehead, slightly above the junction of the eyebrows. In other traditions, as in Theosophy, it is believed to be connected with the pineal gland. According to this theory, humans had in far ancient times an actual third eye in the back of the head with a physical and spiritual function. Over time, as humanity became more physical and less spiritual, this eye atrophied and sunk into what today is known as the pineal gland.