Dear Children of the Sun,

The Incan and Ayamara elders selected February 14th for the ceremony to (more greatly) activate the Solar Disk at Lake Titicaca. The cosmic ceremony heralds the physical re-emergence into the Earth's atmosphere of those called the... Children of the Sun. These are the ones destined to usher in the Golden Age of peace and harmony on Earth. (us!)

On February 14th, we will be present with people from all over the world who have been called to Lake Titicaca to hold sacred the energetic frequencies of the New Earth. All the ancient prophecies point to these powerful times. They tell us that the light of the Sun (Son) will return to earth, opening the hearts of the global family.

We ask you to join with us on Sunday, February 14th, in your services, your meditations, your practices or in groups and hold sacred this day. Using the imagination, see yourselves entwined with thousands of us at Lake Titicaca. See the sacred fires being lit as the many elders and shamans perform ceremonies that call in endless blessings of spirit for the entire planet. See the web of humanity opening heart centers to the Source of All. Feel divine wisdom and love pouring through the portal that is being opened. Imagine all of us holding sacred space and activating loving joy into our own heart centers. See an infusion of love and joy releasing and eradicating the fears and anxieties that have burdened us for so long. See our heart centers anchoring universal love and light into all the people of Earth. See the global family finally soaring to its perfect spiritual state of joy and happiness.

You are asked to activate the Sun's light within you on February 14th for the global heart of humanity. The perfect time will be whenever you feel called upon to link up with us. That is the time known as the zenith hour. We will hold you in our hearts that day as we celebrate the return of the Children of the Sun as the Spiritual Sun is ignited!


Thank you Jo Mooy in Lake Titicaca
See www.starsoundings.com for more info on this ceremony. 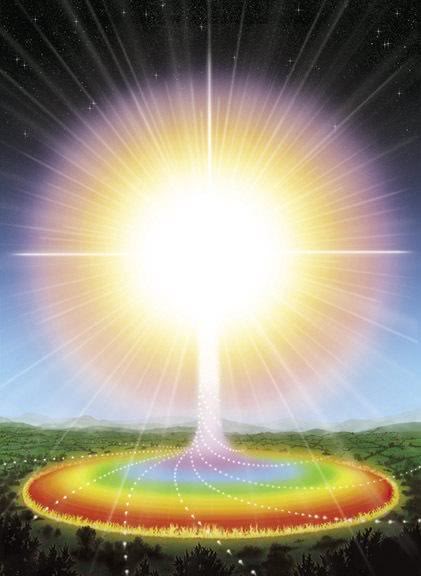 A Simple Understanding of the Golden Sun Disks

A new grid structure of cosmic proportion is greatly activating to assist in the mass transfiguration of the human form and in support for those choosing to advance in expanded consciousness. This new grid, referred to as the Solar Grid, anchors amplified levels of Divine Love frequency and its universal hologram to the Earth plane.


Through the cosmic rays, the Solar Grid works in synergy through the lens of the planetary Crystalline Grid from which we are unifying efforts. Due to the extremely high frequencies transmitted by the cosmic Solar Grid, the Crystalline Grid acts as a stepped-down transformer for this solar energy. As part of the Solar Grid, spiraling golden Sun Disks, serve as the portals and regulators of this highly activating solar energy to the planet.


The Solar Grid connects all of the golden Sun Disks that exist around the world. These disks hold the Great Central Sun encodments to help bring us all back into our original state of multidimensional purity and harmonic love.


The golden Sun Disks can be viewed as "medallions of the sun" which connect us back to the Great Central Sun, or, Source energy. They are likened to a cosmic computer that receives Light information directly from Universal Mind. They help create direct alignment to Source and cause great shifts in consciousness.


Some of us are most familiar with the great golden Sun Disk as part of the energetic structure of Lake Titicaca in Peru/Bolivia which has remained active for many thousands of years. This particular mothership of sun disks along with many more throughout the world are now activating and will all be linked through this newly accessible cosmic Solar Grid and the planetary Crystalline Grid.


There is direct holographic correlation to the Sun Disks with our own expanding heart centers. These disks, through the Solar Grid, help to activate our own "Golden Sun Disk" to enable the full expansion and radiation of our heart into a gateway of universal, unconditional love. Hence, Children of the Sun.


Both the Solar Grid and the golden Sun Disks will assist the Earth and all humanity in total alignment, through zero point centeredness, to the Great Central Sun. These disks are very powerful activation features and part of the higher dimensional technology now arriving for our New Earth creation.


It is visioned that these disks will be integral supporting features for the emerging cities of light and crystalline portal communities as part of the new planetary re-structuring. They greatly contribute to and actually regulate the quantum harmonic resonant field of oneness consciousness for a galactic society.


Our geologist Metatron light brother, James Tyberonn of Earth-Keeper, has brought through much more in-depth information on this subject matter. He says, "the golden Sun Disks are forming the very DNA, for the blueprint for the crystalline field and indeed for the planetary Crystalline Grid. The golden Sun Disks are now emitting a 12-strand helix, in a spiraling energy that will serve, as the prototype of the DNA for the planetary grids. They are also emitting a divine energy of zero field, of pure love, unconditional love, a light-code that can only exist in the higher dimensions."

Each of us contributes to this process by tuning into the frequency of the crystalline field and emitting and receiving pure love.

We hope that you can join us on Valentine's Day... such a divinely perfect time for this amazingly powerful heart centered focus in our field of... Group Avatar!

From the heart of Mother Gaia,

Children of the Sun Foundation
GAIA Federation of Light

Comment by Myriel RAouine on February 12, 2010 at 4:24pm
The Planetary Grid Transmissions


I AM the Resurrection and the Life.


I AM Divine Love.

Welcome home great Masters of Light! We have remembered and accepted our Divine Blueprint and the time for celebration, joy and gratitude is upon our golden throne of love, wisdom and power. For the Christ has returned and we are the golden rays of the Great Central Sun that are activating and birthing new life; let us welcome ourselves back home and embrace all that we are!


May this loving New Moon be filled with joy, laughter and gratitude for every being of light that has guided our souls and soul families back into the full presence of our Divine Expression. We are the flower blossomed in the light, we are the light that created the flower and we are the expression of the two.

May we dance and sing with the spiraling cosmic rays of our Christ Light and embrace the tender sweetness of love and peace with our global family. May we feel the cosmic pulsation of the Holy Breath that is ever with us, sustaining us and empowering us to embrace and become ALL THAT IS.

Let us allow the joy of Oneness to radiate from our heart center to the heart of every being within creation. For our hearts are now fully opened and prepared for this next initiation into the higher realms of eternal life. May the mighty cosmos hear and feel our symphony of Divine Harmony and Balance, a cosmic signal that we are ready.

May our Divine Love stabilize, heal and reunite our family and world into the wholeness that it already is, so ALL may enjoy the bounty of God's abundant harvest. We are leaders in love and service to the great Mother Gaia and to all of the Children of God.

Thank you Divine Creator, Father-Mother Spirit and the Masters of Light for the resurrection and the life of our Christ Self, here now, fully present, on Earth. We are beholding the promise of the Golden Ones and we can hear the ancient hymn of the great prophets.

We are sending forth our love and gratitude to the High Council of the Divine Presence at Lake Titicaca and are fully anchoring the Cosmic Rays of the Christ Consciousness into ourselves and Gaia.

Thank you Lord Metatron for the full activation, clearing and balance of the pillar of light that connects our Alpha and the Omega, Spirit and Matter.