The Banished Prince – A Fairy Tale About Receiving From The Universe (Note The Moral Of The Story!)

Aside from my son, I usually don't tell fairy tales and stories to people. But today I'll make an exception because of this story. A friend of mine just sent it to my email and I was so amazed by it that I was immediately compelled to tell you guys.

Once upon a time (in a land far, far away of course) lived a very stubborn king with one son. Now like all parents, he wanted his son to study hard so that one day he may take over the throne and become an even better ruler than he was.

But there was one problem. His son, the Prince, did not care at all for his studies or becoming king. The Prince's only wish was to play in the forest. Now at first the King tolerated this childish fascination but he soon became infuriated with his son's lack of discipline.

The Prince skipped lessons, avoided his tutors, and whenever the King sat down to pass on his wisdom, the Prince would simply look away day dreaming of the forest.

This went on for a while until the King had enough. Shouting from the top of his lungs he screamed, "If you like the forest so much, then go live there! You are no longer my son!"

And so the Prince did exactly that and was banished from the palace immediately.

The Queen was heartbroken. For days she cried and pleaded with the king, "Please let our son come back home." But the King's mind was already made up. There was no turning back.

Months passed. Years passed. There was no word from the Prince and no mercy from the King.

One day the Queen fell ill and all the top doctors from around the world were flown into treat her. But to no avail. Nothing could save her. Except for one thing and that was her son, the Prince.

Her heartbreak had manifested itself into a fatal disease and the only cure was to see her son back at home safe and sound.

Unfortunately the King was too stubborn. He refused to go into the forest looking for his son. Instead he sought advice from a wise Sage who told the king this, "Send your best men into the forest to find your son. When they see him, they will offer him whatever he wants. Of course your son will say that he wants to go home. He is of royal blood. He will surely ask to return."

The king was thrilled with this strategy. He would save face and cure his Queen at the same time.

So off went the King's men in search of the Prince. When they did find him he was starving, sickly, and scared. They told the prince, "The King has decided to grant you any wish. Whatever you desire, you will get it."

The Prince thought about it for a moment and finally he said, "I want some straw for a pillow." He could have asked for anything in the world and instead he asked for straw. The Prince had forgotten who he was.

Think about this story. Does it sound familiar?

Have you been asking for straw when you could have asked for a palace?

The Universe is willing to give you whatever you desire but if you've forgotten who you are, then you will end up with only straw.

Could you be like the Prince? Have you forgotten who you truly are?

I know this fairy tale is pretty heavy but I want you to take a moment and ask yourself this question. Drop a comment with your thoughts.

Comment by Lucan on June 11, 2010 at 8:25pm
An interesting twist on an old story. How you ultimately choose to interpret it though depends not least of all upon how you understand the figure of the king, and as to who you think the invisible narrator is. Can they be trusted? I wonder. In my own life I not only rejected the old king and all that he stood for but formally renounced any kinship bonds with him. I asked for the straw, and learned to turned it into gold.

But, consider. The forgetting is three parts of the journey home. The ancient mystery teachings presuppose that the aspirant already have a solid foundation, not that the teachings be used for the creation of one. I should therefore hope that we are like the prince. Perhaps it would be interesting if we looked instead at how much we resemble the king, especially there where our spiritual lives are concerned.

In the Light, peace to you Sonja. You have created a very beautiful site here, and I thank you for being.

Comment by Myriel RAouine on June 11, 2010 at 11:54pm
Wow, great insights, Lucan! I appreciate your heart-felt reasoning! You are absolutely right ... I wouldn't have been able to articulate it, though. Do you work more with fairy tales and myths? I love interpreting them and what you say about this one feels absolutely right ... yes, I think it's better to trust in one's own abilities and inter-connectedness than into an old king who inevitably stands for the old patriarchic system - no matter what this knig may offer!

This is exactly the twist between POWER and LOVE ... In the beginning of our journey the desisions we have to make are mostly about good and bad ... the more we advance on our path, the more the decisions become a matter of whether we choose power or love. I read that in a message recently and as I remeber it since I've read it i know it is a basic truth ;-)

Love and Light and Blessings and thank you for taking your time to enlighten me (and mayber others as well ;-) ) concerning this story :-)

I liked this story a lot. It made me think of a comment my husband wrote about me in the adoption report. He said my vunerability is that I can devote to much energy to people who do not deserve it and dont ask for enough for myself. I tend to ask for straw for myself and a palace for others. 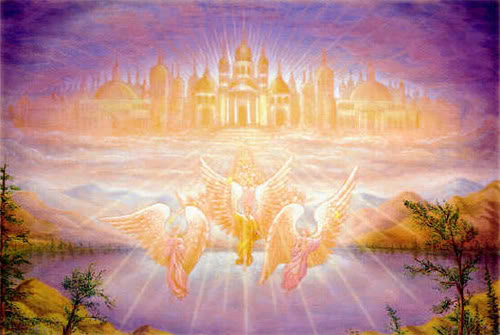 Beautiful and Thank you

The princess challenged by the king to spin straw into gold takes refugee with the elementals - but their help is not priceless ... do you now the story of Rumpelstilzchen?