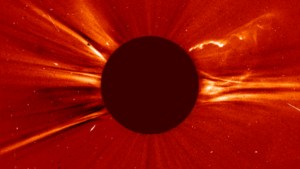 There is still much to be learned about the sun

As a new solar cycle of activity begins this year, the Earth will once again be bombarded with increased radiation from the sun. This effect may damage satellites and interfere with GPS, television and communications.


In ancient history, men would sometimes look up into the extreme northern or southern skies and see flickering green or blue lights shimmering across heavens. These auroras were often attributed to the gods, for what else could explain such displays?

Today we have a more scientific explanation for the polar lights, known as aurora borealis in the Northern Hemisphere and aurora australis in the Southern: the effect is caused by charged particles from the sun colliding with the Earth's magnetic field.

This phenomenon is just one side effect of what is called space weather. The fact is that the Earth is constantly pelted with radiation from the sun, which can play havoc with a society that is increasingly dependent on its high-tech toys.

But for hikers, drivers, pilots and ship's captains, perhaps the biggest concern is that interference from the solar radiation could mislead or disable their global positioning system (GPS) signal.

The aurora borealis is easier to behold in certain years based on a cycle of solar activity, which scientists like Dr. Dirk Soltau at the Kiepenheuer Institute for Solar Physics in Freiburg, Germany, are still attempting to understand fully even after 400 years of study.

“In 1610, Galileo Galilei first noticed ugly spots on the face of the sun,” Soltau told Deutsche Welle. “And he was bothered by this because for him the sun was pure fire and he was surprised to see these, what we call sun spots today.”

Bildunterschrift: Every 11 years, the sun goes through a cycle of varying activity

Eventually, a pattern became clear in the activity of these spots on the face of the sun. Over an 11-year cycle, sunspots become more prevalent and then less and less so. The last period of heightened solar activity was between 2000 and 2002. Within the past few months, sunspots have once again been seen on the face of the sun, Soltau said, which indicate the beginning of the 24th recorded solar cycle, meaning solar activity will increase over the next five years.

That activity means that by 2015, more charged particles from the sun will be interacting with the ionosphere in the Earth's upper atmosphere. This can lead to the ionosphere thickening and interfering with orbiting satellites, Soltau said.

The seriousness of the effects of space weather led NASA to launch the Solar Dynamics Observatory (SDO) into orbit in February to conduct a detailed study of the sun and its dynamic behavior.

GPS navigation systems have gained increased popularity over the past few years to the extent that the devices are ubiquitous in vehicles on the autobahn across Germany. But the receivers are not without their own pitfalls, according to Dr. Mohinder Grewal of the California State University at Fullerton.

As a complex operation, there are multiple errors that navigation systems such as the US-based GPS, the Russian Global Navigation Satellite System (GLONASS) or Europe's planned Galileo system could suffer from, Grewal said.

A location error can occur when the satellite's position in the sky is not accurately locked down by the receiver. The system also relies on extremely precise timing, and so clock errors can create error distances of a few meters. Add to these the distortion caused by humidity in the troposphere and multi-path errors caused by reflective surfaces and the cumulative signal error can be up to 50 meters

When solar radiation causes a flux of ionized particles in the ionosphere, the radio signals used to send data to the receivers on the Earth can be delayed causing more errors on the ground.

Satellite hardware as well as the data is at risk from solar radiation warned Alex Freundlich, professor of physics at the University of Houston.

"Unusually high fluxes of ionizing particles that are associated with high sun activities could be detrimental to the satellite power system and may result in the performance degradation of their solar cells," Freundlich said.

In fact, any orbiting equipment that is unshielded could be degraded by increased solar activity, he added.

Using EGNOS, signal accuracy can be improved down to 1.5 meters, according to ESA.

EGNOS consists of three geostationary satellites over the eastern Atlantic Ocean and Europe. The system augments signals from the GPS system and GLONASS, automatically correcting for the multiple potential errors in the signal.

But as scientists toil to tame nature and make the universe a more predictable place, the solar system does not always comply.

For decades the regular solar cycle simply ceased, according to Soltau at the Kiepenheuer Institute.

"Between about 1650 and 1715, apparently there was very low solar activity, so this cyclic mechanism stopped, and they called this the Maunder Minimum," Soltau said.

Over the past two years the levels of solar activity were so low that there was some conjecture that a new Maunder Minimum period had begun. Only recently, Soltau said, had sunspots been seen leading the scientific community to believe that the solar activity cycle continues.