St. Germain Is The Hierarch Of The Aquarian Age....... 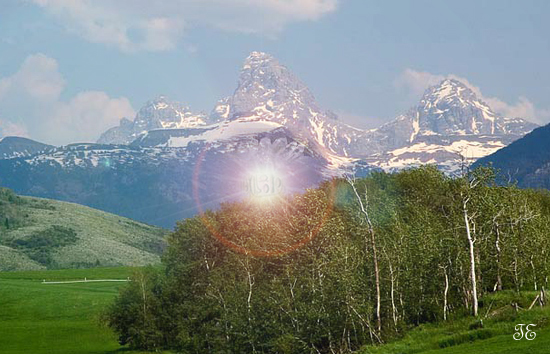 Saint Germain is the hierarch of the Aquarian Age and the chohan of the seventh ray of God's forgiveness, freedom, transmutation, diplomacy and ritual, which is violet in color and vibration. Saint Germain administers the gift of prophecy and his symbol is the Maltese Cross. He has two retreats, the Cave of Symbols in Wyoming and the Rakoczy Mansion in Transylvania.


the Cave of Symbols

Saint Germain was embodied as the ruler of a golden-age civilization in a fertile land where the Sahara now stands. He also served as high priest in the Violet Flame Temple on Atlantis. During Old Testament times, Saint Germain was embodied as the Prophet Samuel, messenger of God's liberation for the Israelites. Following this, he embodied as Joseph, the Father of Jesus, then as Saint Alban, first martyr of Britain. He inspired the Neoplatonists at inner levels before reembodying as the prophet Merlin in the court of King Arthur. Later, Saint Germain came back as the philosopher and scientist Roger Bacon, then as Christopher Columbus who against all odds, found the New World, (an embodiment which has recently been unfairly and severely maligned and misunderstood.) Saint Germain's final embodiment was as Francis Bacon, who authored the Shakespearean plays.

In his great love for humanity, Saint Germain petitioned the Lords of Karma, following his ascension, to be given a physical body. His petition was granted and he returned as the Comte de Saint Germain, also known as the “Wonderman of Europe” and author of The Most Holy Trinosophia.

Known for his miraculous feats, the Comte de Saint Germain was described by Voltaire as “the man who never dies and who know everything.” Saint Germain attempted to bring about a smooth transition to representative government in France and avoid the bloodshed of the revolution, but his counsel was not heeded. Following this, he sponsored Napoleon in an attempt to create a United States of Europe. Napoleon and Josephine could not resist the temptation of absolute power and used the master's sponsorship for their own gain, which ultimately became their loss. Around the same time period, the master turned his attention to the United States of America and inspired the Founding Fathers in bringing forth the Declaration of Independence and the Constitution, two documents that bear the flame of freedom to the earth.

In the twentieth century, Saint Germain sponsored the I AM Movement and the Keepers of the Flame Fraternity for which he is the Knight Commander. He also pledged a portion of his attainment as collateral so that the teaching of the violet flame could come forth once again in an outer way. The violet flame is a tremendous gift. It is the spiritual flame of the seventh ray that transmutes negative karma when it is invoked, and accelerates souls on the path of the ascension. The violet flame, which had been sealed as a secret mystery since the days of Atlantis, is day by day becoming common knowledge to spiritual seekers everywhere.

Saint Germain has pledged to work one-on-one with every lightbearer who makes the determination to keep the flame of life on earth, in memory and in the footsteps of the original keepers of the flame who came to earth with Sanat Kumara. On May 1, 1954, Saint Germain received the scepter of power from Sanat Kumara and the crown of authority from Jesus to direct the consciousness of mankind for the next two thousand years as hierarch of the Aquarian Age. Saint Germain is determined to see to it that the Age of Aquarius will become a golden age and he encourages his chelas around the world to generously invoke the violet flame for the saving of a planet and a people. Won't you join us then, each night, in giving fifteen minutes of violet flame decrees together in remembrance of our Knight Commander?

Comment by Myriel RAouine on December 1, 2010 at 6:31pm
Thank you for posting this unique summary, dear SohiniBen! I'll repost in our 7th Ray group, ok?

I'm learning so much from the Rays, it's really like an awsome journey re-membering who I really am ... but as for the 7 weeks, please keep posting in our children of the Sun group - in this way we will find the discussions more easily lateron - if we remember that a certain Master was part of this 49 day journey we simply go there and will find it ... and I will post or re-post in the according group so anyone stumbling about the Ray group will also be provided with the information. We are really doing a wonderful job of CO-CREATIUON this way :-)

THE LAW OF FREE WILL

THE LAW OF FREE WILL:- By the law of free will, each man is the authority for his own world and has the right to determine that which shall be admitted to his sphere of consciousness. Inasmuch as the thoughts and feelings of the synthetic image –…