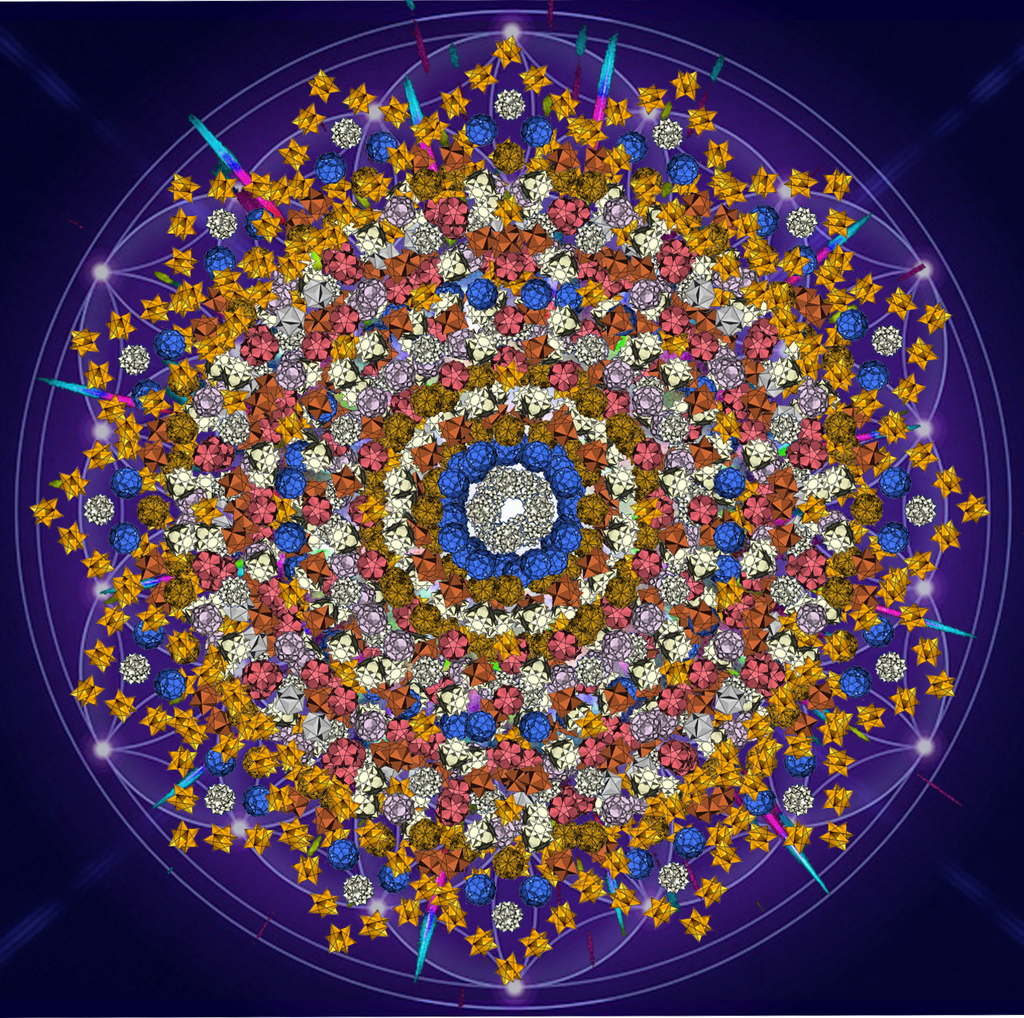 This Grid of Quantum Light has been transmitted to provide Geometric Light Language support as the New Earth crystalline matrix portal space expands more fully now during the amplification of the Eclipse Gateway- which opened in February and culminates with the timeline shift during the total Solar Eclipse on August 21.

Ties to old Earth matrix programming are being severed on personal and collective levels, and timeline bifurcation is unfolding as Grid Workers and Gatekeepers across the planet work earnestly to anchor the New Earth upgrades and process the higher vibrational frequencies of our planet and the influx of cosmic particles and magnetic field adjustments from the Galactic Center and from Solarys, our Sun.

The Grids transmitted during the June Solstice season supported us in clearing space and created dimensional connections to begin to anchor shifting timelines and to establish an open flow of communication with our higher dimensional aspects.

Now, as we have stepped through the Day Out of Time and into the Lions Gate Portal, this Grid has been transmitted to provide a prismatic, structured crystalline field in which we can truly begin to traverse from the old timelines and into the new.

Much has been written about this intense time of transformation: the splitting of timelines, the spiking of the Schumann Resonances, the crystalline matrices, the New Earth upgrades. It is widely agreed that we will begin to experience on a greatly increasing realistic level the existence of different timelines, of completely different realities - depending on where we are in our souls journey on Earth in our physical form, and where the energetic relationship of our human mind to old Earth matrix programming is.

It is so important that those who are guided, who have seen through the lies, the chaos, the false light of old Earth programming do all that we can to assist in anchoring the higher frequencies, processing the cosmic rays, breaking down the collective constraints of mind control - to allow the new paradigms to crystallize and solidify into this dimension - and to hold the space open for more and more humans to step into as they become ready.

This Grid is a powerful tool that has been delivered during this Eclipse portal to amplify, anchor and process the cosmic influx of rays, particles and frequencies that are bombarding our human bodies and our planet Earth. This is happening of course on linear and non-linear levels, as we are being physically and energetically pushed toward the timeline split that will be facilitated by the total Solar Eclipse.

The coded geometric field that is created by this Grid of Quantum Light is prismatic, splitting light and separating out linear and non-linear frequencies and vibrations. It is crystalline, metallic and multidimensional in its nature, providing a coherent framework for anchoring the frequencies into the core of our mother Gaia, into the spiraling dodecahedral array of our DNA, and into the core of every cell in our physical bodies.

It is infused with the light of Sirius, enmeshed in the sacred geometry of the Flower of Life, and built upon the foundation of numbers that are the raw material of Phi life force in this physical dimension. It contains geometric code to create new realities, to guide us through dimensional corridors outside of linear time and space, and to connect and materialize new thought forms while ushering away the old and transmuting them back to neutral quantum particles of light.

Energetic structures are contained within it to terminate old, distorted energies and to manifest 'miracles' on the physical plane through an unwavering and pure connection to Source. Incoming frequencies are transformed to their highest potential, and energies are made malleable by the metallic vibrations of Gold and Copper prisms within it.

This Grid is useful in conjunction with any spiritual, energetic practice or light language transmission you may be working with individually or in groups during this pivotal time in our human journey.

Use it in open eye meditation, print it out for ceremonies or altars, provide it on screens of any size during meditations, gatherings, while getting ready for sleep or upon waking etc. Transmit it into crystals, stones or simply take it in and then emanate it from your heart, head and belly etherically into any physical space. And of course, and perhaps most importantly, intentionally transmit it through your torus fields and outward into all the nested torus fields that we are existing here in 'Earth Physical' 2017!

As soon as you focus upon the Grid, it will permeate your merkaba fields, fill your aura/subtle bodies, and connect to the multidimensional water and tetrahedral core of the cellular structures of your physical form. Follow your intuition and and your own practices to anchor and work with the Light Language that is transmitted by the grid through the next two weeks and beyond, with the knowledge that within it is the structure and support for releasing of old programming and the codes to allow the new paradigms and timelines to take hold.

(During my practices with this Grid, I was guided to work also with Dimensional Space Grid of the Solstice portal in June https://goo.gl/3AAUuX to facilitate and enhance the processes of timeline/ matrix shifting as well.)

Take care of yourself during this intense time, be well and hold the collective vision of a new way of living in human bodies here on planet Earth. The 'TIME' is NOW, we are at a pivotal place in our personal transformation and in the transformation of all humanity. May we be fully supported in doing the work, anchoring the grids, holding the light and creating the space for this to unfold and to be open for all those who are to follow in the coming times.

With eternal LOVE and Gratitude,

Thank you so much Angela for this inspiring message,

Thanks for this beautiful message with perfect Geometrical Mandala.