Shakti in our Individual Lives - Making the Change

The Importance of Shakti If we do not allow change to occur, if we block it with tension and neurosis, then energy  cannot flow freely and this results in decreased body lustre, premature ageing, disease, a
joyless existence. We lose that quality which is the essence of youth and vigour:  Shakti.

In order to unlock the mystery of Shakti, we have to change our view of the world and our  attitude towards things. To understand how to gain Shakti from situations, people and things
requires time and training. We need to learn firstly how to relax in life and accept things before
we try to change them according to our own ego-centred views and desires. Then we can start
to utilize and control our energies through various postures, pranayama and meditative
practices.

We cannot approach life in the same old way, day after day, if we want to grow and expand.  One of the areas where we most have to change our view is in regard to sexual relationships.
Women are tired of being seen as sex objects or regarded as no more than vehicles for
reproduction. No human being can be satisfied with a purely physical relationship that does not
also deal effectively with the higher emotions and ultimately has as its basis a spiritual purpose.

A reaction to this occurred in our society during the '70s and '80s as women, protesting the  abuse of their bodies, minds and souls, organized women's liberation movements and Mother
Goddess cults which suppressed masculine dominance and often attempted to substitute it
with female dominance.

This potentially destructive rift between the sexes can be bridged by the basic philosophy of  tantra. In a tantric approach the union of the opposites at all levels is attempted. Neither sex
need be shackled or liberated and neither needs to cut itself off from the other, as indeed any
extreme reaction creates new neuroses. A neurosis cuts us off from our fellow beings, from
nature, from the ground we walk on and from ourselves. It denies us access to our energy and
vitality. Tantra teaches us rather to accept not only ourselves, but others; to rejoin the
community of human beings and living things; to surrender to what life gives us. Only when we
rejoin (yoke, yoga) ourselves to life, can we attempt the appropriate changes necessary for
better living.

Once we decide that change is necessary, how do we go about it? Tantra teaches us that  within each individual lies potential completeness and fulfilment, the perfect blending of
opposites. The first step is to learn asana, pranayama and meditational techniques; to
reawaken the Shakti within ourselves. Once we feel that extra transforming quality in our own
lives, we begin to live the philosophy and actually experience what it can do for us. The various
nadis, psychic centres and psychic passages become a living reality for us.


In tantric philosophy the female represents Shakti, energy, matter, while the male is the  embodiment of consciousness. When the female starts to work on her Shakti through yoga
practice, she becomes very powerful and dynamic, more so than the male. Her Shakti exudes
into the environment. Such yoginis or Shaktis are the inspiring force in work and at play. This is
something that has to be experienced, and once experienced, the lower forms of pleasure no
longer give the same satisfaction. The Shakti, the female yogini, becomes the gateway to a
transcendental lifestyle for the male and for the family. A true tantric relationship relies on
conscious awareness and use of Shakti so that life becomes a play and interchange of energy
and consciousness. The female role is given more importance and respect, and concomitantly
Shakti worships Shiva.

Tantra is a science of illumination of the nervous system. At the basis of tantric philosophy is  the liberation of energy and the awakening of kundalini. Tantra is not just a sexual system as
many people believe, though it uses sexuality. It uses everything in life and sexuality is just one
small part of the tantric system, an advanced stage requiring great discipline. 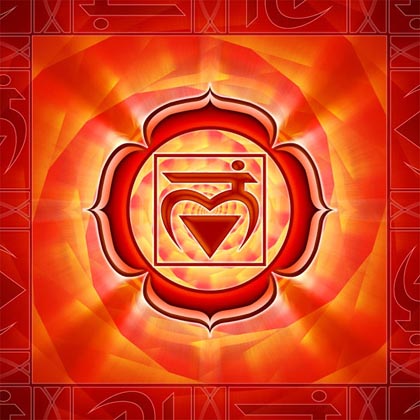 The seat of kundalini, cosmic Shakti, resides in mooladhara chakra. The awakening of this  chakra is a powerful event in the life of any human being, male or female, and the beginning of
true enlightenment. Only the female can awaken this chakra via sexual experience; the male
must use kriya yoga.

Neuropsychologists have theorized that women have a unique connection between their  forebrain and cerebellum, which may account for the fact that during sexual activity and orgasm
they enter altered states of consciousness, such as floating sensations, loss of body awareness,
a sense of unity with the cosmos. Men appear to lack the neurological capacity to integrate
pleasure into the frontal neocortex of the brain and cannot reach the same transcendent
heights.

From the yogic point of view this occurs because in the female the mooladhara chakra lies  within the vagina, at the neck of the cervix. In the shamanic tradition the source of power for
the female is also said to lie within the womb. Their 'lines of force' are connected to the uterus
and it is through the use of these lines that the shaman flies and performs other feats of power.

The awakening of mooladhara chakra and the ascension of Shakti to sahasrara at the crown is  the great and final event in an individual's evolution. Until that point we all, male and female,
have to use yogic techniques to balance the male and the female within us. The man must
develop receptivity, the ability to flow, gentleness, intuition, and other feminine attributes,
and the woman must develop the masculine qualities of outward directed energy, strength and
logic. Each of us must have our head in the clouds and our feet firmly on the ground, if we are
to balance our spiritual aspirations with our worldly affairs.

As we utilize yogic sadhana (daily yoga praactice), the internal forces and pressures open up  various compartments of body and mind so that the process of rebalance occurs by itself. The
individual begins to speed up his evolution in an effort to transcend the slow evolutionary pace
of the mass of humanity, still trapped in the lower centres. Society's preoccupation with limited
physical, sexual and sensual entertainment is symptomatic of mooladhara and swadhisthana
predominance. As the inner life expands we no longer seek thrills and excitement in a vain
attempt at fulfilment, for all experiences become more subtle and satisfying. We not only see
women in a different light but the sacredness and mystery of life pervades all the corners and
recesses of experience.

The whole world glows with Shakti.

ESSENTIAL PRINCIPLE OF BALANCING THE FOUR BODIES:- The integration of emotions and feelings manifest as unconditional love, joy, happiness, bliss, compassion. Spiritual passion and enthusiasm, to name just a few. We also need to integrate our…

BALANCING AND INTEGRATING YOUR FOUR-BODY SYSTEM

BALANCING AND INTEGRATING YOUR FOUR-BODY SYSTEM:- Often we tend to overidentify with one or the other. Some people feel life as their main function, others think about life and are less concerned with their feelings. Still others are so involved…

Divine Decrees for Gaia and Humanity By Steven Hutchinson

EVERYONE HAS FOUR DISTINCT ENERGY

EVERYONE HAS FOUR DISTINCT ENERGY:- Everyone has four distinct energy bodies, each with a different and unique perspective a Physical Body, an Physical Body, an Emotional Body, a Mental Body and a Spiritual Body (which consists of many bodies, in…