The Seeding has BEGUN!

Comet ISON is nearing our Sun and will reach maximum closeness on November 28th. It is made of ice and dust - and no one knows exactly what will happen - but the following image might help us understand what is going on BEHIND the 3D scenes and that there is truly NOTHING to be feared: 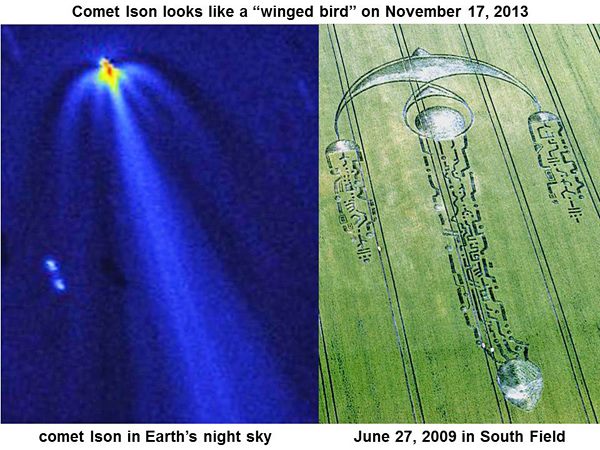 As Cynthia Schlosser so beautifully explains in her SpiritusSanctus News: A comet is made up largely of ice.  As it travels through the cold cold vacuum of space, it stays largely intact. As it approaches heat, like our sun, it evaporates water from the
fiery heat and forms a large tail as shown below in the crop circle.

This water contains amino acid chains which is what science has discovered seeds new life on planets like ours.

...
The dusting of our planet with these minute divinely coded water crystals is similar in essence to the fairy tales of old, where magic pixie dust worked miracles.

According to some, the comet will hardly be visible - while other sources insisit that it will accompany us throughout the 4 weeks of Advent - which announces the Coming of the CHRIST.

I , for my part, see the SON in I-SON ... and more. I-am-the-SON - and this I is EACH of us ... The Seeding of CHRIST Consciousness which will cuminate in the Winter Solstice and Christmas Celebrations.

Will we still see ISON around Christmas? No one really knows NOW, because no one can foresee if the Sun will melt part of it and break it apart or not.

Fact is that it is NOW nearing the Sun and it is leaving a trace of amino acids and water in the heliosphere. And it was welcomed by a sixpointed STAR formation of our planets around the Sun - and thousands of lightworkers were actively participating in global meditations that day.

The SEEDING of Christ Consciousness has begun

Writing this, my computer begins to play lovely meditation music although I didn't do anything ... celestial spheric music is NOW playing here for me. What a sign :-)

OPEN your HEARTS and minds and ready yourself to RECEIVE!

If somehow possible, keep a candle lit from now on until the 29th.

Lay out aninstinct crystal GRID which will help you to focus your attention on the Celestial Happenings. Work with it - sit in front of it in meditation and CHARGE the crystals with the energy of anticipiation - the ADVENT of the COMING of the CHRIST ... and this time CHRIST does not come in just one personal incarnation - CHRIST CONSCIOUSNESS is going to descend and those who are ready to ascend will be the first to be BLESSED by it :)

This BLESSING will help us to take our seats as the KEEPERS of Mother EARTH again ...

Thus, FOCUS on your connection to GAIA Terra Shan, Mother Earth - and prepare to take FULL RESPONSIBILITY again of ALL that happens on her surface!

Dear Luminakisharblaze lovingly reminded me of the importance of HUMANITY working together again with the elements to bring about the CHANGE in as smooth a fashion as somehow possible!

Cleansing is what is happening NOW.

Re-MEMBER: WE HAVE COME HERE TO AID THIS PROCESS!!!

The more of us who take responsibility, the easier the changes are on all of us!

Our daily connexions inundate the planet in Violet Light four times a day - JOIN IN!

FEEL where your attention is needed BEFORE volcanoes erupt, BEFORE the earth shakes, BEFORE typhoones form to cleanse the atmoshpere, BEFORE torrential storms break lose moving landmasses to burry whatever is in their way.

Re-MEMBER your birth contracts, your LIFE MISSION - and bring in your MULTIDIMENSIONALITY into the NOW of 3D life - which at that very moment that you begin with it is no longer 3D - but already accelerating in frequency, moving to meet New Earth in the 5th Dimension!

Re-MEMBER: Humanity came to Earth in order to serve as a BRIDGE between Heaven and Earth and between all inhabitants of this blue diamond planet: the Mineral Kingdom, the Animal Kingdom, the Plant Kingdom and the Fairy Kingdom. When Humanity fell, all the kingdoms were affected. They each took over as much as they could from our responsibilities - thus, for example, dolphins and whales became the Keepers of the Energy Grids on Earth, the Trees kept the field of UNITY Consciousness, the Mineral Kingdom hid the most powerful energy from humanity's reach in the depth of Mother Earth to thwart abuse, and the Fairies separated from the 3rd dimension in order not to be dragged down the same route as humanity was, still, however, maintaining the 3rd dimension from their side of the veil.

NOW is the time to re-MEMBER!

When Christmas is the time of the COMING of the CHRIST - meaning CHRIST = UNITY Consciousness - NOW is the time to PREPARE for it!

The Advent of Christ Consciousness begins on November 28th.

Candle lit - Grid set up - we inundate the Planet in VIOLET LIGHT NOW and BRIDGE the gaps between the continents and races until there are no more gaps - but only LIGHT = God Consciousness - and ALL the members of humanity re-MEMBER: WE ARE LIGHT, WE ARE LOVE, WE ARE MADE OF ONE SPIRIT - and this WE is not only humans, but animals, plants, minerals and fairies, too! And TOGETHER we will usher in NEW EARTH!

Thus, I encourage EACH of you to post a discussion when you see that our united LIGHT is needed at a certain place on Earth to help the elements, to aid the kingdoms bring BALANCE to ascending EARTH!

May we awaken into the NEW EARTH reality TOGETHER, soon,

I have a few idea of what is going to happen, mars had a Coma atmosphere when it passed by , and bizarrely it happen when the GOV. shut down  there is only 3 images by other then NASA  that had took these image that are credible, since NASA did not wanted to share its info we got other professional to take the images .

Now as for the final presentation

They talked about storing food and such , now its the moment ,

we went back to point Zero , and now we are going to LEVEL 1

everytime i meditate outside at minus 21 celcius  and then open my eyes they have these ships or orbs probes that flashes to my questions , as i have always been able to call upon the ships to appear , Sarah could confirm that i can make them appear , seem to be connected with some of them all my life and now in place for my mission to start in a couple of days , surely a new earth  and happy to be at my post for this , and will be assisted by thy angels as they were called eons ago .

the last one appear today 24th as i ask for a update  the night before , and the ships appeared outside at 3:50 am

so its a happy time to be here and assist them , spiritually as you are all doing and physically for some that will be called upon , weve been watching and listening , and now its showtime

shine your love and light 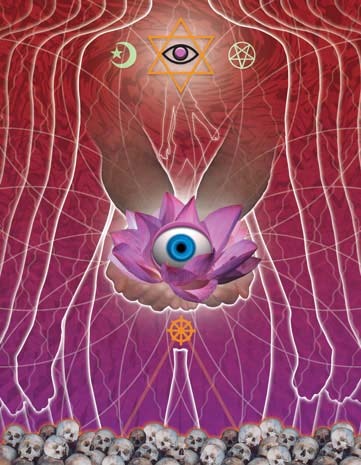 Thanks, Sonja, for sharing a good discussion! Keep it up! 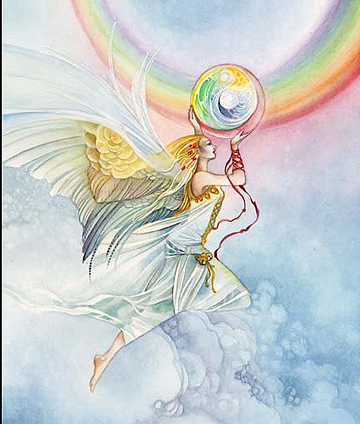 November 28 marks Comet Ison's swing  around the sun.
The closest approach to Earth will be the day after Christmas.

REMAIN CENTERED:- Lord Jesus said “Love your enemies”. When you approach a person, neighbor, family member, stranger, or fellow worker on the job who is run by the negative ego, the first thing that GOD is teaching you is how NOT to be. You are…

SERVICE OF GOD:- The battle we are all in is to climb this mountain known as God Realization. It is not an easy mountain to climb, especially on this planet. It is not easy to master the mind, emotions, physical Body, negative ego, inner child.…

SPIRITUAL ARMOR:- Lessons will always arise, but once you are the captain of your ship, setbacks are temporary. Paramahansa Yogananda said in his writings that life is a battlefield. Lord Krishna in the Bhagavad-Gita, told Arjuna to give up his…