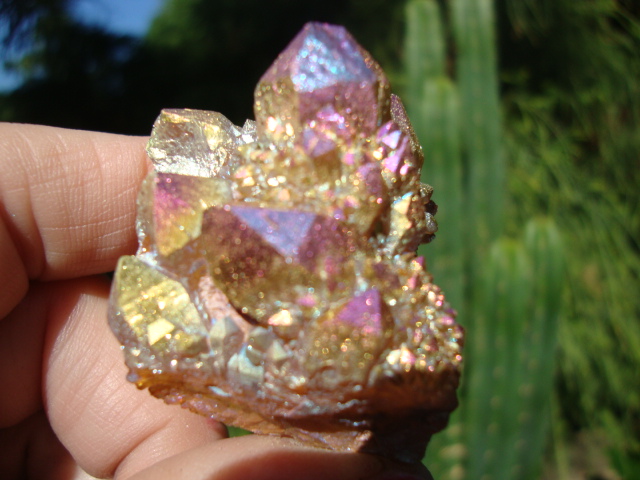 Holding the ‘Living history of Light’

When I first saw these beautiful crystals I knew they were carrying a big reflective ‘solar message’. They glowed indoors like a beacon adrift a dark sea. They hold hundreds of smaller reflective crystal points and messengers. Like a cloaked mother ship that houses many smaller craft, these crystals both reflect and protect. They are infused with Zirconium which gives them both a golden and pink mirror quality. These beauties call themselves ‘Solar Fractal Crystals’. They are magnificent and powerful activating the Rainbow Body, balancing the seven major chakras, and unlocking blocked psychic channels. These ‘Solar Fractal Crystals’ are truly Master Healers. The deep reflections of gold and magenta enhance the connection between the solar light and the solar heart.

Fractals can be thought of as never-ending patterns, they are vast teacher beings and can be found in all of life. Fractals of solar instructions come from the sun via the power of the neutrino. The solar neutrino is a tiny neutral light. It weighs so little that no one has been able to measure its mass. Neutrinos are among the most abundant particles in the universe; they existed before electrons birthing at the moment of the big bang. They hold the living history of light. There are 700 million neutrinos for every proton. Hundreds of trillions of neutrinos are passing through your body right now, while you are reading this without leaving a quantifiable trace behind.

When the sun is at solar minimum a greater number of solar neutrinos are produced. The neutrinos are able to pass through the Earth in a fraction of a second because their speed is close to the speed of light. These particles are traveling in straight line, through humans, through rock, water, air, like a bullet passing through a fog bank. When atomic nuclei come together or break apart they produce neutrinos. Without neutrinos, the sun would not shine. These solar fractals bring us a mathematical sequences, in key form that will allow us to break rank and move to the top of the cosmic class without going to summer school. These are conscious light particles that seek to leave a breadcrumb or two in the forest of life, helping those that seek a new conduit and path of higher knowing and insight.

Golden energy strengthens all fields of the body and spirit, Illuminates the heart, and gives courage. Golden energy helps increase personal financial matters, prosperity, wisdom, and power. Gold is the highest vibration of light the human body can receive and sustain. This Golden Energy is able to raise the body's frequency, dissolve, and release blockages replenish light force on a cellular level, and restore the body's natural harmony. Golden light is an energy generator and remover of blockages. It has the power to strengthen, amplify, and conduct energy in the body symbolizing the power of cell regeneration. It spurs the regeneration of neurotransmitters in both lobes of the brain. It also helps the nerves to improve the flow of information through the body. Golden energy also has the power to ease tension, irritability, and anger.

Zirconium is a light, strong metal, a space metal very similar to Titanium. Its energy is antimicrobial and protective. Use it for removing energy blockages and accumulated toxins in the body. Zirconium like Titanium is completely hypoallergenic. Zirconium molecules are bound to the quartz by the natural elector-static charge of the crystal, creating a spectacular golden sunrise full of every color of the rainbow. Use for this beautiful crystal for deeper meditations, journeying inner-outer space and interstellar communication.

Spirit quartz is a beautiful crystal in its own right and brings peace and positive energy to all realms. It transforms negative energy into positive energy. It is a very protective stone, and excellent for auric shielding. Spirit quartz is also excellent for astral projection, dream work, shamanic journeying, and rebirthing. It can remove fear and trauma, bringing emotional peace. Spirit Quartz has layers of Druzy crystal which are tiny sparkling crystals on the surface of another crystal. The energy of Druzy crystals is similar to that of mini-crystal clusters.

This new type of alchemical composition in crystalline form comes as a reflector and protector stone. It allows the barrage of solar neutrinos to be quelled and facilitated in a more user friendly way. Like pollen from a spring tree, the winds of change shift the pollen count everyday. These solar fractals crystals help dissipate the solar neutrino count down to a place that is more applicable to human nature, without fear of cosmic over load. The Living history of light is a very long book that seeks to be read!

Within all of us lives a fragment of the Blue star that seeks to know itself in form. An ancient Hopi Indian prophecy states, "When the Blue Star makes its appearance in the heavens, this will be the Day of Purification.” The Hopi name for Sirius is Blue Star/ Kachina. Prophecy says, ‘The fifth world will come when the Blue Star/ Kachina dances in the plaza and removes his mask for He represents a blue star, far off and yet invisible, which will make its appearance soon.” This Blue star brings us a promised divine sign allowing a droplet of hope to enter our very human heart.

The essence and vibrations of the three faces of the star Sirius is a part of human origin. It is the place where the stars crossed in our human DNA & bloodline. Within the deep vibration of Sirius lives our future as well as our past. The vibration of the three-star system in Sirius aligns with the trinity aspect of all creation. Sirius A is aligned with the Christ, masters of light, that sit in light for Earths highest good, the heavenly father or guiding teacher aspect. Sirius B is aligned with the whales and dolphins, mermaids and the power of water. Sirius C is called ‘the star of woman’ by the Dogon tribe in Africa. This star is aligned with the divine feminine light and healing.

Labradorite represents the "temple of the stars”, it brings the wisdom of other worlds and universes down to earth. This stone asks you to shine as if your life depended on it. Labradorite grants inner knowing, enhances intuition and psychic perception and allows one to see auras. It helps one to understand their destiny bringing Light to the shadow realms of self. Labradorite helps purge negative thought patterns. It brings out the best qualities in you, asking you to be the very best you can be. (good, better best, never let it rest until your good is better and your better is best) It makes you a better person shining and polishing your aura.

The "flash" known as ‘labradorescence’ is a flash of light in the dark." Labradorite enhances night vision and helps to see past illusions. It also allows us to understand ourselves on a deeper spiritual level, letting us know who we are in a bold and distinct way. Labradorite builds and strengthens the immune system by giving you insight to your own beauty and power. It clears, balances and protects the aura. This stone is used for dream recall. It increases intuition, psychic development and reduces psychic anxiety simultaneously. Labradorite is an excellent stone for those seeking to lose weight as it balances and regulates metabolism, bringing patience, and perseverance.

Labradorite is a stone of transformation. According to an Eskimo legend, the Northern Lights were once imprisoned in the rocks along the coast of Labrador. a wandering Eskimo warrior found them and freed most of the lights with a mighty blow of his spear. Some of the northern lights were trapped within the stone and thus we have the beautiful stone labradorite.