Rare Lunar Eclipse During Leo: Prepare For a Huge Energy Shift On February 11, 2017 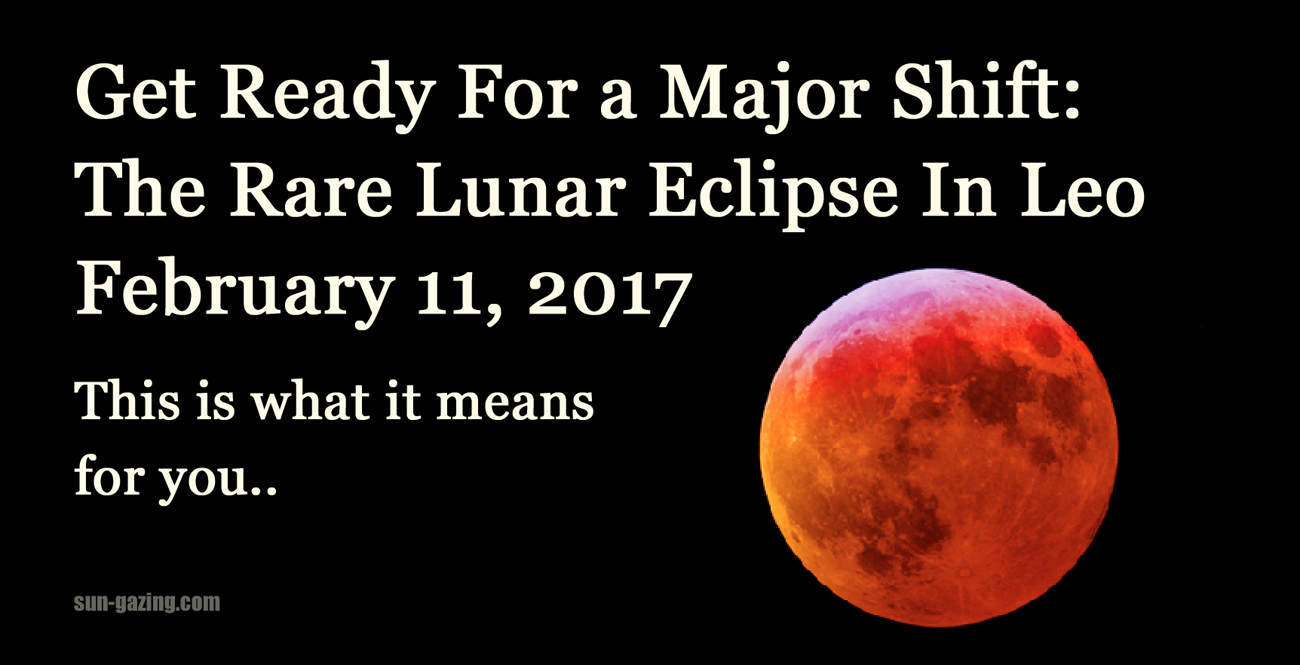 
This coming Friday, on the night of February 10-11, there will be a special lunar eclipse taking place on a full snow moon. The eclipse will be visible for those in North America, Europe, Africa, and most of Asia, so sky gazers across the world can look up to watch it, weather permitting. During the eclipse the moon will appear to be cast in subtle, silvery darkness, as the Earth’s shadow falls upon it.

Lunar eclipses occur when the sun, Earth, and moon all line up in that respective order. As the moon passes behind our planet and enters into the Earth’s umbra, its shadow, the resulting alignment causes the shadow to fall upon the moon, making it noticeably appear a few shades darker. However, since this lunar eclipse is penumbral, rather than total or partial, the moon won’t actually enter the umbra. Instead, it just barely misses the Earth’s strong inner shadow and as such will be immersed in the outer weaker portion of the Earth’s shadow, which is called the penumbra. That’s why this eclipse will be much subtle, as compared to a total or partial lunar eclipse.

Check out this video below for a taste of what you can expect:

From a historical perspective, the full moon in February is traditionally known as a snow moon because the month is often both the coldest time of year and when snowfall tends to be the heaviest. However, what is even more interesting are the astrological implications of this month’s full snow moon and lunar eclipse taking place in Leo. The celestial events usher in a time for changes and new beginnings and the resulting shift in energy will have a profound impact on people’s lives. So while this month’s beautiful eclipse may be fleeting, in the weeks and months ahead you will end up feeling its effects in a very meaningful way!

Even though each and every one of us will experience a personal change, which may be slight or life-altering, here are the more significant ways in which this lunar eclipse may affect us:

Many of us will find a renewed sense of purpose and direction within ourselves, the type of which has been lacking in our lives lately. Eclipses are always times of powerful change and this one is highlighted by the fact that it occurs in Leo. As such, the fiery, passionate, dominant characteristics of the noble and courageous leader that Leo embodies will be at the forefront of even the most timid person’s personality. When the influential traits of Leo are combined with this new sense of purpose, expect a lot of people to finally take back control of their lives and futures.

Check out this video below for a taste of what you can expect:

On a related level, many of us will also begin to stop caring so much about what other people think of us and the decisions we make. We will let go and simply trust in the path we are choosing to push forward on. Where in the past we’d be held back by opinions and judgments coming from others, such things will no longer have any negative or preventative effects on us. With the shift in energy comes a shift in our thinking and we’ll start deciding things on our own, for ourselves.

Some people will be more confident and conscious of their choices. Whether it be a major life decision or a seemingly inconsequential one, they will go with their gut feelings and stick with whatever it is they decide. This will be due in part to a major re-focus in our self-awareness and a more balanced, internal centering that we will turn inwards on ourselves. As a result, we’ll be entering a much happier and more enlightened phase of our lives.

A lot of us will find that things are finally coming to an end and are being completed. This is a very broad and general effect lunar eclipses always seem to usher in, and as such the sense of finality may appear in essentially any area of our lives. It may manifest as a relationship that has finally burned itself out and now you can move on from it, or perhaps you’ll wrap up a project that you’ve been working on for ages. Regardless of where these endings occur, they will mark the last of things which are over and done with! It always feels good to say goodbye and now you can move on to bigger and better things.

Those are just a few of the stronger effects that the full snow moon lunar eclipse may have on any one of us. Overall, the lunar events mark the beginning of a number of transformations that we will each go through in the year ahead, and it has only just gotten started!

Please SHARE This With Family and Friends So Everyone Can Enjoy

This is a momentous time!

A Love Rush Changes the Tides

February may already feel far more charged than January, as loads of fire rifles through our atmosphere. To add to the speed of things, we are entering eclipse season. On Friday, Feb. 10, a Full Moon Eclipse in fire sign Leo opens your heart’s door like never before, as it forms a beautiful angle of support to change-maker Uranus in Aries.

Eclipses come in pairs and are separated by two weeks. This period of time in between these two lunar events becomes potent and powerful in terms of promoting swift change in your life, at times in an unexpected fashion.

Fortunately, there is exceptional energy upon entry on Friday, Feb. 10, as it will have a way of aligning you with what you want with incredible speed in some cases. It may also open your heart in ways you didn’t see coming and it may surprise and amaze you in the process.

Make room for more Love and it will surely find a way to rush on in!