The coming of moon-time to the women

The coming of moon-time to the women

Thank you to Crystal Joy Bradley for the below link 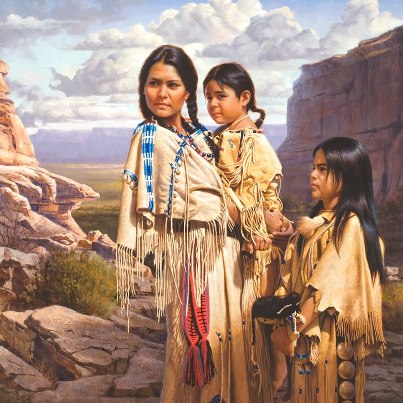 One day, a woman was out in the forest, crying because the burden had become so great, when Raven heard her and asked, "Mother, why do you cry?"

The woman responded, "I love my family so very much. I hold my family in my heart and soul, but the pains of life have filled me up. I can no longer help my family. I can no longer take their burdens from them. I just don't know what to do."

Raven responded, "I understand the pain you feel, as I feel it also. I will go and ask Grandmother Ocean if she knows what to do." So Raven flew to the ocean and shared with Grandmother the plight of the women.

Grandmother Ocean responded, "If the women will come

to me, I will wash their pain from them, but this won't help the ones who are far away. Let me ask my sister, Grandmother Moon, if she can help."

So Grandmother Ocean spoke to her sister of the women's plight. Grandmother Moon responded, "I am the power of the feminine. I will send into the women, my sisters, your waters carrying my power. Once every moon cycle, you shall come into the women through me and purify them." And, she did this. So ever since then, every woman has a time each moon cycle when she

embodies the power of the moon and flows the cleansing of the ocean. We call this the woman's time of the moon, or moon-time.

A few other things I found :)

"The Moon Lodge is the place of women, where women gather during their menstrual time to be at-one with each other and the changes ocurring in their bodies. Long ago, during this special time of moon cycles, women were removed from duties of family and allowed to retreat to the Moon Lodge to enyoy the company of their Sisters.

Traditionally, the Moontime is the sacred time of woman when she is honored as a Mother of the Creative Force. During this time she is allowed to release the old energy her body has carried and prepare for reconnection to the Earth Mother's fertility that she will carry in the next Moon or month. Our Ancestors understood the importance of allowing each woman to have her Sacred Space during this time of reconnection, because women were the carriers of abundance and fertility.

As Grandmother Moon is the weaver of tides ( the water or blood of our Earth Mother) so a woman's cycles follow the rhythm of that weaving. When women live together in a common space, their bodies begin to regulate their menses and all will eventually have their Moontime concurrently. This natural rhythm is one of the bonds of Sisterhood.

Women honor their sacred path when they acknowledge the intuitive knowing inherent in their receptive nature. In trusting the cycles of their bodies and allowing the feelings to emerge within them, women have been Seers and Oracles for their tribes for centuries."

Women Who bleed with the moon

The moon has always been the primary symbol for female energy; its cycle around the earth takes approximately twenty-nine days, the same amount of time as the average woman's menstrual cycle. It is often felt that as the pull of the moon affects the waters of the world, so does its motion affect the body of woman.

A women's blood and hormonal cycle follows the ebb and flow of the moon; from new moon to full moon, estrogen increases leading to ovulation, or maximum fertility, at full moon. From full moon to new moon, the waning half of the cycle, progesterone predominates. Traditionally, women used to start bleeding right before the new moon, in the dark of the moon.

In modern times, women begin their menstruation during different phases of the moon. Their bodies are out of sync with the moon and their spirits have forgotten the meaning of Grandmother Moon. One way to get back in harmony with the moon is by performing ceremonies and rituals at different times during the moon cycle and also by honoring the time of menstruation.

When a woman begins her monthly bleeding, she has a very special vibration. The blood flow is cleansing as the old uterine lining is sloughed off, one monthly reproductive cycle is ended. At menstruation, women have the chance to rid themselves of all old thoughts, habits, desires, and be receptive to new visions and inspirations for the next cycle. This is the dark moon phase.

If a woman continues her normal routine at menstruation, then she loses a uniquely female opportunity for introspection. She also finds she gets more tired, irritable, and upset because her physical rhythm has slowed down. She needs rest, more time for meditation, and less time doing housework, cooking, working in the outside world, and taking care of children.

In many Native American tribes and other tribal cultures, there is a separate moon lodge to which all women go. Since most women menstruated at the same time (have you noticed women who live together bleed together) during the dark of the moon, the grandmothers and fathers took care of the children. Food was left outside the lodge several times a day. Women during menstruation were/are considered to hold a certain power and not allowed to mingle with the rest of the tribe. Many tribes have taboos against these women, believing that their power would interfere with the hunt or take away the power of the medicine bundles.

This is also why women are not allowed in sweat lodges and must stand outside the circles in other ceremonies when they are in their moon time. We know now that women were also segregated because of fear of the immense power which enabled them to bleed each month and never die -the greatest of all the Mysteries- while a male warrior might succumb quickly after losing so much. - Women's Medicine Ways' Cross-cultural rites of passage Marcia Starck