Thanks Myriel for sharing the crop circle message.

The following message in quotes is translated from German to English, using google translate, without pictures and links and with few words as they were in original script.

On 23 June 2015 the appear in the flight path of the Turin airport a crop circle, will provide discussion. A crop circle with both clear and profound message. This crop circle contradicts completely in his code that hypothesis, according to the "aliens" would create these pictograms in the cornfields. And he know out what have central importance for us those forces that arise from the mother earth itself.

This pictogram discovered on June 23, 2015, the pilot Aeroporto Torino Aeritalia. The crop circle is a few hundred meters from the runway of the fairly busy Turin airport. All pilots and passengers, the landing or taking off in Turin, can see this formation.
But this also means that this is an actual crop circle phenomenon. Had such been created in this complexity and size of human hands an icon, this is a large group of well-educated "crop circle creators" and a multi-day work would have been needed. But nothing of the kind was observed.

This pictogram noticed immediately that regular beams, each consisting of 8 rings and circles. This points to an ASCII code, to that code, after each PC and laptop works. And that's what it is!
The solid circles each represent a "0" represents that no full circles each, a "1". So yields z. B. the sequence 01000101, the large "E", etc.

All 16 beams can be decoded by this scheme and give:
"TimeoETferentes!"
This is Latin and literally means:
"I myself from the transmitting ETs!"
And that's a real sensation! After all, the "crop circle intelligence" that the thousands created crop circles that have appeared so far, tells us so with that it poses no messages from ETs and aliens!

This statement exacerbated by following background:
These words clearly play a hexameter verse by the Roman poet Virgil (70 v. Chr. To 19 v. Chr.), And indeed from his work Aeneid, Book II, verse 48-49. The Aeneid describes especially the fall of Troy. There, the Trojan priest Laocoon makes the saying:

This translates as: "I myself from the Danaans, even when they bring gifts". The Danaans are those Greeks who have just left the Trojan horse as a "gift", which ultimately leads to the downfall of Troy.
That explains why the crop circle intelligence to guard against the extraterrestrial transmissions. Because with this allusion it compares the "coming from above messages" with the Trojan horse. And they called these messages as maximum organization dangerous if we grant these people in our minds and in our hearts intake!

The central message in the "ET" is an abbreviation for "Extra Terrestrial" and therefore means "not coming from Earth." Therein lies a pretty clear indication of our history. Here is a pretty short and concise summary:
In the intellectual history of the people we recognize from approximately 3500 v. Chr. A deep fracture. From then hierarchical, patriarchal societies evolve. From then on there in the first place a differentiation between rich and poor, from there, there is the spiritual masculine principle over the female nourishing and from then until people begin to wage war against each other.
Triggered or at least underpins emotional is this "new society" by the gods and their religions. The man had begun, "towards the light" align "upwards". Nothing wrong with that, but instead of forces that promote man in his development, he found there the gods.

These gods told the people that they (the gods) would not be from Earth and they even claimed that they had created both the earth itself, as well as humans. Accordingly, these gods ETs, just aliens. They ordered the people to serve them (the gods) and to worship them, "subject" to make the earth and dominate all life on Earth. They told the people that the woman would have to play a subordinate role, they ordered the people against each other to go to war (in fact so, read again the "Old Testament" in ...), etc.
If you want to know all the more precisely, I have set before you the book "blasphemous earth in turmoil" (>> see here ...) my heart.

The man believed.
And the man obeyed.
The world we have today, with all its power, control and fear systems, has evolved from this obedient faith.
And all this had begun, that we went to not coming from the earth gods into the trap.

If we really want a "new world" in which we live a full life, we will certainly not been given "from above" (from the Extra-Terrestrial). A new world is possible by a new way. In this new way people listen to the uncontrollable and free forces of life, to the voice of Mother Earth.
In principle, this is all very simple. The only prerequisite is a change in our orientation. If instead of the constant search for "up there" a donation to the nourishing primordial forces "down there" begins, we already tread the "way of force".
More you can find in the free downloadable excerpts>> here ...

To me it is well aware that this newsletter will trigger violent reactions. I have finally contradicted the popular alien theory concerning the crop circles. Instead, I see Gaia, the loving Mother Earth herself, as the crop circle intelligence that communicates with us about these people pictograms.
I also have "the light beings up there," warned the current focus on and shown already in my books, that their intentions for us so are not "full of light". Instead, I have here the focus on the free-flowing primal forces of life (which are not controllable and not steered by an egocentric desire) advised. This of course goes against the current Esoteric mainstream completely.

However, this crop circle at the airport of Turin has shown exactly this controversial and revolutionary thoughts on June 23, 2015. At an airport! The hundreds of people who see this pictogram at your departure, take this information on a subconscious level into itself. Take this information with you and carry them out into the world ...

Let us change the succeed to a better world!
And May we muster the courage to think for the necessary revolutionary thought and the resulting unconventional ways to go!

To feel the connection with Mother Earth and the primordial ground directly and to experience, there are again two
Experience nights inside the mother earth.

We ask for early registration, since experience shows that this experience nights are soon fully booked.

The personal code is Venus astrology of the new age. He describes that time qualities, which are created from the Mother Earth herself. Therefore, it is the primal force of life is very close and can tell you where your strengths and abilities are, or in what time cycle you're currently on.

In this training you will learn a lot about yourself. You learn to understand the patterns of time and use them for your life. But you will also learn how to create the personal Venus Code and how can you advise other people with it.

Here you can by the way your personal Venus code itself compute ...

Divine Love and Light with All.

When I look at this crops circle, I feel that these inner symbols of HEARTS also bear a message - and that the two rings are moving and when they move into synchronicity they open the lock ... 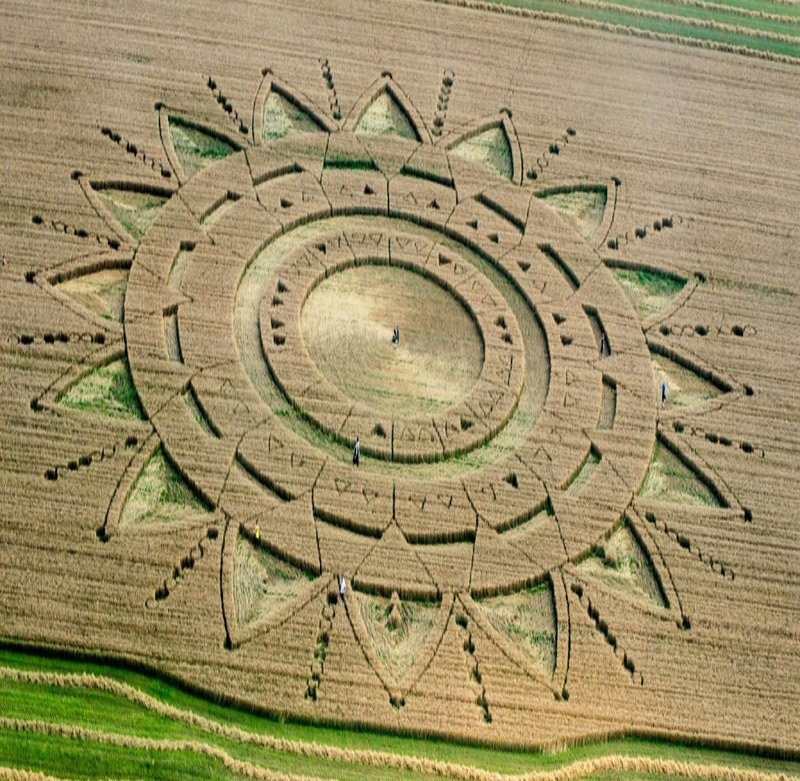 Now, here's the link to the article in the crop circle connector with even more details:

To be found here at lightgrid, too:

VICTORY IS A MAGNETIC MOMENTUM

VICTORY IS A MAGNETIC MOMENTUM:- Victory is a light, a being, a consciousness, Victory is a flame whereby the collective will to failure focused in the subconscious of the race as a negative spiral of defeatism is inverted, overcome, and…

KEEPING YOUR PROMISE TO THE HOSTS OF THE LORD

KEEPING YOUR PROMISE TO THE HOSTS OF THE LORD:- Only those who sustain momentum of service and keep the flame of their hour will remain a part of this chain of oneness. Those who fall in their commitment will find that by cosmic law the angelic…

ENERGY FIELD OF THE MIND OF GOD