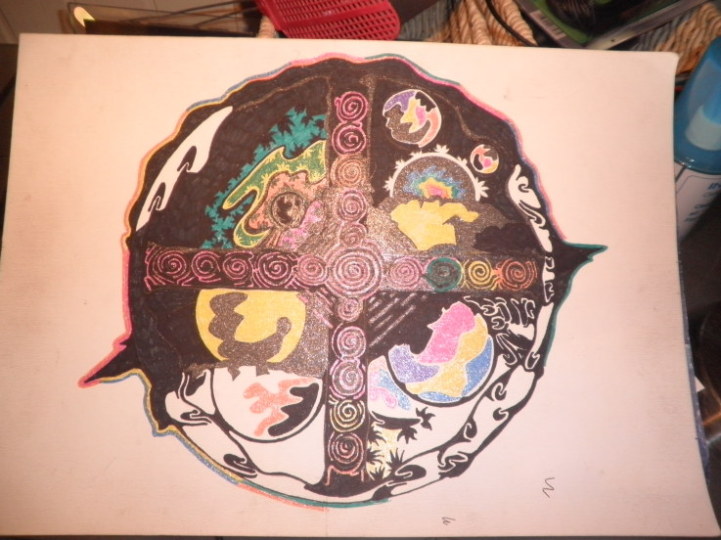 On July 12, 2012, I was awakened from dreamtime by the voice of Jose
Arguelles saying to look up the alignment for July 24, 2012. He said this is
a very important day. I immediately knew that was the ending of the
Dreamspell calendar for this year. I looked up the meaning of the glyph for
that day, and it is the Red Overtone Earth, which is guided by life force.

Then I looked in a book I have had for years called It's About Time by Nell
Arnaud. This is what it says about the Red Overtone Earth, which is called
Caban. " Caban is the glyph of the red earth and is the access point to your
natural alignment with Earth force. It is the point-of-perfect centeredness
in the eternal present from which all alignment and magic manifest. Your
center, the Earth center is the secret of gravity's magnetizing force. From
the center point within self, you align with this galactic center. "

It goes on to say "Caban is a symbol of the Earth Keeper, the keeper of the
garden, the shaman-healer who, through reverence for all life, heals and
sanctifies the Earth. As you bring light to yourself, you bring light into
matter. Caban also has a staff that is both connected to the cosmic
consciousness of the stars and firmly planted in the Earth. Caban holds the
ascension of Earth and all humanity."

After reading the meaning of this glyph I understood what is so important
about this day. It is a day when we need to do ceremony, or meditate, to
initiate another consciousness shift to push us totally into a new reality.
If enough of us can bring in the light we can cause a big difference in the
world. It would be kind of like the Harmonic Convergence that happened in
August of 1987 which pushed us into a new timeline. The Harmonic Convergence
was instigated by Jose Arguelles. He has been nudging me to get this
information out there so we can gather in consciousness and move into the
energy of love, joy, and magic.

The tone for Caban is called Overtone and is the number five. This is the
number of the year we are in. The number 2012 equals five. The Goddess Star
is a five-pointed star and represents the planet Venus and the Pleiadian
system. This is what the Mayan Calendar is based on.

The meaning for this Overtone is about radiance and the vibration of center,
empowerment and taking command. Radiance is the quality of radiating out
from center, expanding one's essence and energy so that it is felt,
perceived, and seen at a distance. Use this Overtone to empower your
radiance by committing to your center. Your center is the most stable, wise,
calm, joyous, and powerful part of you.

Being centered means to be self-validated, self-assured and aligned with the
present moment. When you are this intimately connected to yourself and
aligned with the present moment, you are an unstoppable force, able to take
command and be resourceful. All the energy and intention to this point has
been gathered up to empower and intensify the intention of your creation and
to facilitate the next phase of creation. See why July 24 is such a
powerful day? July 24th is the last day of the calendar, and July 25 is a
day out of time and also a time for celebration. It is New Year's Eve for
the Dreamspell.

I think it is very important to pay attention to those days and connect with
this energy. It's time to move out of pain, suffering, and all of that old
third-dimension stuff we don't need anymore. This Dreamspell calendar is
lined up and starts with the star Sirius rising over Egypt and the Pyramids.
Sirius was a very important star for the ancients. It was also very
important for the United States because our government was set up on July 4,
1776, which lines up with 13 degrees Cancer and that is where Sirius is
located in the heavens.

The glyph for July 26, or this upcoming year, is the Blue Resonant Storm and
is ruled by the planet Pluto, which is a very powerful planet. This glyph is
called Cauac and is the initiation by fire, the lightning path, and the
arrival of the thunderbeings who bring the final transformation. To the
Maya, Cauac represents the storm, the thundercloud full of purifying rain,
and the lightning that shatters any false structuring of reality. Pluto
rules Scorpio, and Saturn will be moving into that sign in October of this
year. The moon's node will move into Scorpio by the end of August so look
for the shattering of false reality.

This is why it is so important to release all of your fears, worries, and
negative thinking now so you can move into this new energy and start
manifesting happiness. Live in the NOW! Yesterday is gone; tomorrow is not
here yet, so what is there to worry about? Worry is just an illusion anyway,
so why stress out worrying about what may happen? Create from the energy of
your heart. All is well in my world. Blue storm will open a gateway to new
consciousness.

The tone for the Blue storm is called Cosmic. This tone will last from July
26, 2012 to July 26, 2013. Cosmic, the final and thirteenth tone of creation
is the Cosmic Tone of presence and the vibration of endurance,
transcendence, and magic flight. Presence is the connecting thread among all
of life. The presence of life is what we all share.the universal life force
that underlies and unifies all things.the presence of spirit, the presence
of love, the presence of your cosmic self.

Use the Cosmic Tone to bring your full presence into the world and express
your spiritual consciousness. Be present in each and every moment. Rejoice
in your ability to transcend all limitations and to endure the waves of
life. Be fully present to the waves of life for their entire duration. This
tone represents the final stage of completion. Be flexible and allow for
change and new viewpoints. Expect dramatic transformation this year.

The Olympics are starting on July 27, 2012, and it is in England this year.
England has been one of the main powerhouses for the banking system and
control of the world. The reason for this is that the energy from the great
central sun that holds 27 galaxies in place focuses into Stonehenge and the
dark took control of that area. .If we focus our energy on this area at the
opening ceremony of the Olympics, and send lots of love and light and good
thoughts to that area we can change the energy from one of control to one of
love. Please check out this video: Vortex Energy part 29 - 2012 Olympics,
Crop Circles, The Olympians and the Consciousness of Humanity
.

If the information in this article resonates with you, please find time to
do some kind of ceremony on July 24 so we can all join in consciousness to
bring more light to Mother Earth. Then on July 27th, we could all focus on
England. We are powerful beings. We are the ones we have been waiting for,
and it is time to take back our power. We are God's perfect children and
It's time for us to manifest the power of Love.

I am  increasingly impatient.....

Permalink Reply by viracocha patchacutie pachacamac on July 22, 2012 at 6:09am

IN THE NAME OF THE LIVING GOD

MIRACULOUS ENERGY:- If you would have the benefit of this miraculous energy, if you would be visited by the genie of the lamp of freedom, the Master Saint Germain himself, you have but to make the call. For the fiat of Almighty God has gone…

THE FULLNESS OF YOUR INDIVIDUAL GOD SELF-AWARENESS

THE FULLNESS OF YOUR INDIVIDUAL GOD SELF-AWARENESS:- You who are living in the advancing decades of the century are the beneficiaries of this legacy of Saint Germain bought with a price – the overwhelming love of the Master Saint Germain, whose…

ENLIGHTENMENT OF THE CHRIST MIND AND CHRIST FLAME

ENLIGHTENMENT OF THE CHRIST MIND AND CHRIST FLAME:- The dispensation could never have been granted for students to invoke this flame outside the retreats of the Great White Brotherhood had it not been for the fact that Saint Germain offered upon…

SACRED FIRE:- The violet flame was reserved for the privileged few up until the time when Saint Germain came before the Lords of karma with the proposal to make the knowledge and use of the violet flame available to all mankind. He boldly stated…

THE MOST WORTHY STUDENTS

THE MOST WORTHY STUDENTS:- The violet flame has always been used in the retreats of the Great White Brotherhood situated on the etheric plane – the highest plane of matter – where the ascended masters preside, receiving only the most worthy…