See the Bright Yellow Star Arcturus in the Night Sky

Over the next week skywatchers can expect to see a brilliant star that sparkles with a golden yellow or topaz hue that is situated about one-third of the way up from the eastern horizon as darkness falls. This is Arcturus, in the constellation of Boötes, the Herdsman.

Arcturus ranks as the fourth brightest star in the night sky, behind Sirius, Canopus and Alpha Centauri. In older astronomy books, it is actually ranked sixth behind Vega and Capella, but modern measurements have shown it to be a trifle brighter than those two stars.

As if it weren’t already easy enough to find, there is another way of locating it. Simply remember the following mnemonic phrase – "Follow the arc to Arcturus." That means just this: look at the Big Dipper.  Its handle is bent.

The Big Dipper Now, Then and in the Future

All year round you can see Arcturus by following the curving line of the handle in the Great Bear, extended 30 degrees. An old tradition has it that one can "Arc to Arcturus" from the Great Bear to locate the star.

This sky map of Arcturus shows where the bright star appears in the eastern sky.

Imagine extending a curve from the handle; a curve that is readily translated into a smooth arc. Continue that imaginary arc about the length of the Big Dipper and you will ultimately come to Arcturus. So remember – "Follow the arc to Arcturus."

Some folks may add an additional line: "Then speed to Spica," for that same arc, continued past Arcturus for roughly the same distance, will also take you to the bright bluish star Spica in the constellation of Virgo. [Top 10 Star Mysteries] 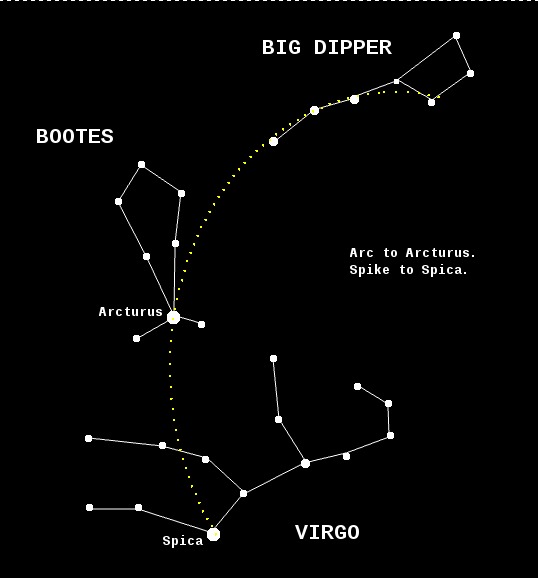 The Stars of Spring

As winter fades and spring arrives the stars in our evening sky change and new stars, not seen over the winter, make a reappearance.

Two of those stars are Arcturus, in the constellation of Bootes, and Spica, in Virgo, both of which will become early evening objects in April (in early March Spica doesn’t rise until 2130, three hours after sunset).

Spica, or the “ear of wheat” is held by Virgo the Virgin, and its presence in the evening sky has long been used by ancient astronomers as an indication that spring is coming.

To find these stars start with the curved handle of the Plough and continue that arc down to Arcturus. Spica is the same distance again beyond Arcturus. You can use the common mnemonic: “Arc to Arcturus and spike down to Spica”.

These stars should be easy to spot as they’re very bright, Arcturus being the fourth brightest star in the night sky at -0.04 magnitude (only Sirius, Canopus and Alpha Centauri are brighter, and only one of these – Sirius – is visible from the UK), and Spica is the 15th brightest at +1.04 magnitude.

Arcturus is so bright for two reasons: (1) is it intrinsically quite bright, being an orange giant star (the Sun would fit inside Arcturus 17000 times), and (2) it is quite close to us, being only 37 light years away.

Spica, by comparison, is intrinsically even brighter (it too is a giant star, but it is a super-hot blue-white giant compared to the rather cooler orange Arcturus), but it is a little smaller (“only” 400 Suns would fill it) and much further away, around 260 light years distant.

Arcturus has been estimated to be roughly 25 times the width of the sun – about 20 million miles (32 million km). Its brightness is about 115 times that of the sun.

In his definitive three-volume work "Burnham’s Celestial Handbook," astronomer Robert Burnham, Jr. pointed out that with modern infrared recording devices, the heat received from Arcturus can be measured, and is found to "equal the heat of a single candle at a distance of about 5 miles."

It was nearly 78 years ago – on May 27, 1933 – that Arcturus became the object of a great publicity build-up in Chicago, at the opening of the Century of Progress Exposition.

At 9:15 p.m. Central Time that night, the star's light was focused by telescopes on photoelectric cells, and the electrical current that was generated was used to activate the switch to turn on the floodlights at the exposition grounds.

Arcturus was chosen for this task because Chicago previously hosted a World's Fair in 1893. The best estimates at that time said that the light from Arcturus required 40 years to reach Earth. So a story was built around the fact that the 1933 fair would be opened by light that had started its trip while the 1893 fair was still in progress.

However … today, more accurate measurements place the distance of Arcturus at 37 light-years from Earth. So it was really starlight that started toward Earth in 1896 that turned on the lights of that 1933 fair. One light-year is the distance light travels in a single year, about 6 trillion miles (9.7 trillion km).

Another interesting fact about Arcturus is that it appears to shift its "fixed" position in the sky much more rapidly than most of the other bright stars (the sole exception being Alpha Centauri). Sir Edmund Halley was the first to discover this motion back in 1718.

Arcturus appears to zip through space at a speed of nearly 324,000 mph (521,421 kph)in the direction of the constellation Virgo. It seems to be moving toward Virgo by about 1 degree (which is about twice the apparent width of a full moon) over a time span of about 1,500 years.

So we are very fortunate to live at a time when the distance separating Arcturus and our solar system is nearly at its minimum. It will continue to approach the Earth for several thousand years more, but then it will pass us as it continues to move toward Virgo and its distance from us will begin to steadily increase.

Computations show that in approximately 500,000 years, it will probably have moved out as far as 800 light-years away from us and likely will have faded completely from naked-eye visibility.

The two dots over the second "o" in Boötes mean that you should pronounce the vowels separately: Boo-OH-tes, not (as many people say), Boo-ties! It is a Greek word meaning a man who tends to a herd of cows, so maybe we should refer to Bootes as "the cowboy of the night sky."

In the allegorical sky pictures of star atlases of a few hundred years ago, Boötes is usually pictured holding a large rod or staff. Boötes is supposedly chasing after Ursa Major, the Great Bear. This is why some legends refer to Boötes as "The Bear-Guard."

On most sky maps Boötes resembles a narrow kite, but it could also be envisioned as an ice-cream cone.  At the bottom of the cone shines Arcturus. And since it has an orange hue, we might say that the cone was holding orange sherbet, and perhaps somebody bit off the bottom of the cone allowing the last little glob (Arcturus) to dribble out.

Joe Rao serves as an instructor and guest lecturer at New York's Hayden Planetarium. He writes about astronomy for The New York Times and other publications, and he is also an on-camera meteorologist for News 12 Westchester, New York.

i thought id bring a bit of tech into this discussion :) here is Arcturus as shown on Google's database.

may our souls shine as bright as Arcturus does. By the way, this is the perfect night to identify Spica. The moon will pass quite close to this on April 4, and it’ll be near the star throughout Saturday’s total eclipse of the moon.

Spica in the constellation Virgo looks like one star, but this single point of light is really a multiple star system – with at least two member stars and possibly more – located an estimated distance of 262light-years away.

Spica’s constellation, Virgo, is so large and rambling and difficult to see that we haven’t marked it.

However, you can look for a little squarish figure even farther to the south than Spica. This square star pattern is the constellation Corvus the Crow (Raven). Check out the star chart below to see where Corvus is in relationship to Spica.

Only two weeks left in our annual fund-raising campaign! Have you d... The little square star pattern near Spica is another constellation, Corvus the Crow. From the western half of North America, a total eclipse of the moon will sit low in the west before sunrise on Saturday, April 4. Be sure to find an unobstructed western horizon. The bright star near the moon is Spica. Read more about the lunar eclipse.

SELF-MASTERY:- What is the mastery of the self? To properly answer this question, we must first define the self. Beloved disciple of light, that you are what you are regardless of what you think you are. The affirmation of the Real Self of every…

ASCENSION IN LIGHT:- The ascended masters remain behind veil, which means simply that because of a lack of surrender or a lack of development in the chela(student), they retain a certain anonymity to remain elusive to the outer consciousness,…

WHEN THE PUPIL IS READY FOR THE BREAKTHROUGH, THE TEACHER APPEARS

WHEN THE PUPIL IS READY FOR THE BREAKTHROUGH, THE TEACHER APPEARS:- The student must transcend the former state of consciousness; else he will repeat the same mistakes. To transcend that state, he must break through the paper bag of his own…

THE MASTER’S GARMENT:- In olden days in the Eastern tradition, the chela is the slave of his master for good reason – not for the loss of his true identity, but for the replacement of pseudoimage with the real image of selfhood. The chela, by…

KEYS TO INNER REALITY:- Just there are many would-be chelas in the world, so there are many who could be chelas who know nothing of the path or of chelaship. There are still others who, for lack of outer contact with our representatives, walk the…