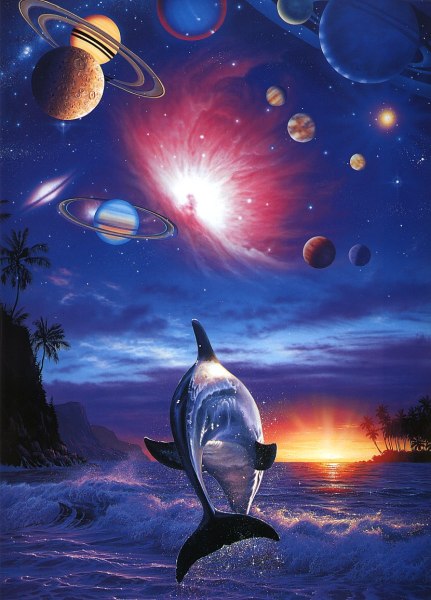 The Galactic Federation of Worlds

The Galactic Federation of Worlds (GF) is a large federati
on of civilizations from many different planets, galaxies and universes working together for the harmonious existence of all life. There is a galactic federation in each of the inhabited galaxies of our universe. These federations are part of the universal management structure much like field offices are part of the management structure for a large corporation.

Each race, civilization, and planet has a council within the GF to represent them. These councils vary in size depending on population as well as the amount responsibilities they carry within the management structure of the GF. There are literally thousands of these councils since there that many races represented. The GF is much larger than we may imagine.
The Great Halls of the GF

The GF has one major overseeing council which has representatives from each member council. This council meets in the Great Hall. But each council has its own Great Hall. Perhaps this is why there is so much confusion around this Great Hall business. Many channelers attend meetings in the Great Hall and think there is only one, when in fact, it could be the Great Hall of one of the member races or civilizations. You see how quickly it gets all complicated.

The Nibiruan Council the largest of these councils, has its own Great Hall but also meets in the GF’s Great Hall more often than not because its duties involve GF management. Nibiru is not a planet with one civilization, instead it is a GF starship with representatives from many races whose role is that of a traveling galactic management team. Their mission is to help negotiate alliances and maintain peace among the different worlds of the GF and assist new and incoming members. Hence their slogan, “Serving the Worlds.”

The GF for our Milky Way galaxy is located in the Sirius star system. Our sun is a stargate to that system, and the GF. That is why the dog star Sirius is so important to Earth and plays a significant role in our history.
G. F. History

The Milky Galaxy Galactic Federation is the oldest GF in this Universe. It was established at the end of the first Great Galactic War that was fought in the Lyra Constellation between the Humans, Reptilians, Felines and Carians. After this war, the survivors decided that they must establish some way to arbitrate disputes so that this kind of destruction (destruction of the Humans’ homeworld Avyon, the First Earth) would not occur again. Thus, the GF was established with the founding members being Lyran and Orion. Their first flagship was Pelegai, one of the few ships intact after the war. This was a very painful time and the wounds of this war would take many dimensions of time to heal.

In the beginning, the GF was very small since so few had survived the war. The Lyran Council and Orion Councils doubled as the administrative arm of their new fledgling federation. In other words, they were the GF. In time new races were created as offshoots of the original four and the GF welcomed them as they reached galactic status, as we are about to do now.

So the Galactic Federation grew and became a very large and powerful federation of worlds devoted to universal peace and prosperity. Now there are millions of members from across our galaxy.

Thanks SohiniBen, If I had not read this article, I would not have known the group!

Thanks, now it's more clear in details!

Thank you so much for this information SohiniBen, when I read this, I was feeling the pain of those long-ago wars, and am so grateful that the GF was founded so that it can help all beings in our Galactic family.  Each new article brings new awareness. I Love the picture too !  Namaste, Margaret