OM MANI PADME HUM
Hail the jewel in the lotus

It is very good to recite the mantra Om mani padme hum, but while you are doing it, you should be thinking on its meaning, for the meaning of the six syllables is great and vast. 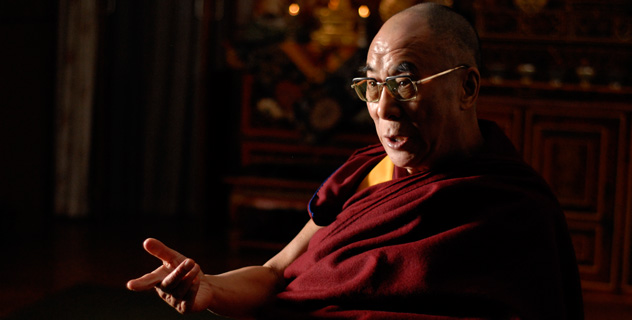 By His Holiness the Dalai Lama Tenzin Gyatso The Fourteenth Dalai Lama of Tibet.

How is this done? The path is indicated by the next four syllables. Mani, meaning jewel, symbolizes the factors of method-the altruistic intention to become enlightened, compassion, and love. Just as a jewel is capable of removing poverty, so the altruistic mind of enlightenment is capable of removing the poverty, or difficulties, of cyclic existence and of solitary peace. Similarly, just as a jewel fulfills the wishes of sentient beings, so the altruistic intention to become enlightened fulfills the wishes of sentient beings.

The two syllables, padme, meaning lotus, symbolize wisdom. Just as a lotus grows forth from mud but is not sullied by the faults of mud, so wisdom is capable of putting you in a situation of non-contradiction whereas there would be contradiction if you did not have wisdom. There is wisdom realizing impermanence, wisdom realizing that persons are empty, of being self-sufficient or substantially existent, wisdom that realizes the emptiness of duality-that is to say, of difference of entity between subject an object-and wisdom that realizes the emptiness of inherent existence. Though there are many different types of wisdom, the main of all these is the wisdom realizing emptiness.

Purity must be achieved by an indivisible unity of method and wisdom, symbolized by the final syllable hum, which indicates indivisibility. According to the sutra system, this indivisibility of method and wisdom refers to wisdom affected by method and method affected by wisdom. In the mantra, or tantric, vehicle, it refers to one consciousness in which there is the full form of both wisdom and method as one undifferentiable entity. In terms of the seed syllables of the five Conqueror Buddhas, hum is the seed syllable of Akshobhya - the immovable, the unfluctuating, that which cannot be disturbed by anything.

Thus the six syllables, om mani padme hum, mean that in dependence on the practice of a path which is an indivisible union of method and wisdom, you can transform your impure body, speech, and mind into the pure exalted body, speech, and mind of a Buddha. It is said that you should not seek for Buddhahood outside of yourself; the substances for the achievement of Buddhahood are within. As Maitreya says in his Sublime Continuum of the Great Vehicle (Uttaratantra), all beings naturally have the Buddha nature in their own continuum. We have within us the seed of purity, the essence of a One Gone Thus (Tathagatagarbha), that is to be transformed and fully developed into Buddhahood.

(From a lecture given by His Holiness The Dalai Lama of Tibet at the Kalmuck Mongolian Buddhist Center, New Jersey.)

Om Mani Pedme Hum (or Om Mani Pedme Hung), is the most common mantra in Tibet, recited by Buddhists, painted or carved on rocks, prayer wheels, or yak skulls and seen around most usually. Tibetan people, almost all Buddhists, do believe that it is very good to practice the mantra of Chenrezi, the Bodhisattva of Compassion (The protective deity of Tibet), which may, relieve negative karma, accumulate merit, help rescue them from the sea of suffering and achieve Buddhahood. Speaking the mantra loud or silently, spinning prayer wheels with the mantra, and carving mantra into stones are the usual practices.

PADME means lotus and symbolizes wisdom. Growing out of mud, but not being stained by mud, lotus indicates the quality of wisdom, which keeps you out of contradiction.

The last syllabus, Hum, means inseparability; symbolizing purity & can be achieved by the unity of method and wisdom.

The mantra Om Mani Padme Hum (literally: "Aum, to the Jewel in the Lotus, hum) is recited by Tibetan Buddhists to invoke Chenrezi, the Bodhisattva of Compassion. Repeating this mantra accumulates merit and eases negative karma; meditating upon it is believed to purify the mind and body.

Spinning prayer wheels, physical or digital, are believed to confer the same benefit as speaking the mantra. It is often recited with the aid of a mala (string of prayer beads.)

Brought to my attention by Arleem: