Well, when you cut out the INNER circle and MOVE it - you get two more very interesting designs:

MEANING of the number 48:

Numerology meanings for 48 caution you that others exploit you. It is as if you are born to serve others. They use you to satisfy their selfish ends. When you give advice, they pay a deaf ear to your words.

Angel Number 48 is a message from your angels that a cycle or phase will soon be coming to an end, with rewards coming from hard work well done. Do not fear lack or loss as these endings and conclusions will lead to auspicious new beginnings and opportunities, and your success and achievement will bring blessings and rewards of many kinds into your life.

The 48 petals of each of the two petals of the Ajna Chakra located between the two eyebrows.

According to R. Allendy, "it is the ratio of the initiation, 8, with the natural law of the Cosmos, 40". Product of 4 x 12, it would express the development of the mutual relations in the nature. And as product of 6 x 8, it would show the holiness found in the payment of Karma.

The rhombuses becoming smaller and smaller seem to indicate 3-dimensionality, thus, the same pattern can be expected to be repeated on the other side of the sphere: 48 x 2 = 96

According to lucky numbers, this is a "highly lucky number" - in contrast to the number 48.

Angel numbers confirms that it is, again, a number which speaks of the CLOSING of a cycle and thus a new beginning - Make yourself ready for an upgrade in your life!

Angel Number 96 is also a message that it is time for you to detach from your material items, particularly if you have had any obsession with any material possession/s or a need to own them.

Moreover, according to riding the beast, 96 corresponds to the number of petals of the Ajna Chakra located between the two eyebrows - 2 x 48.

And brotherinchrist explains in a comment: If you overlay the orb of the 9 and the 6 over each other . you get what looks like a spinning galaxy.....ajna chakra....galactic conciousness......whats next universal conciousness ....think universal- work galacticaly....i love this website.....numbers and letters are a truly amazing thing....they do make your mind go round.....BUT...love makes the universe go round...the universe was created by an act of love....all the wonders of the cosmos just waiting to be explored......one humanity gets its act together the technology will be born that will allow humanity out of its solar system .....the heavenly mother and father. wont allows us to take our squabbles out into the universe 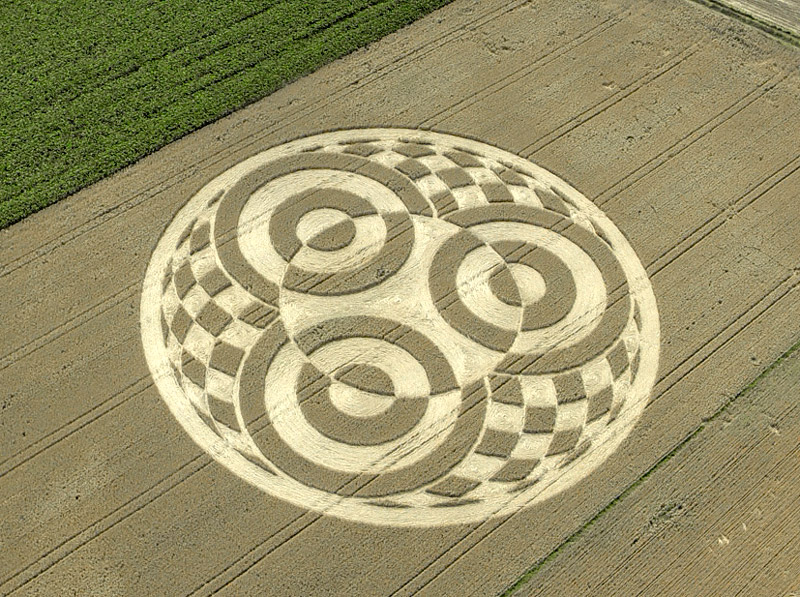 Beside these numbers we see 3 circles of 4 layers in a typical yin-yang pattern.

Thus, the main numbers are:

If we perceive the pattern of rhombuses to symbolize a SPHERE, we might need to add the number 9 to the first sequence - which would then be like an equatorial RING

1 2 3 is like a stairway. The steps of ascension? A spiral ... From Unity to duality and the couple reproducing ... 3 being the number of the multitude - the number of TRINITY which brings forward all and everything. 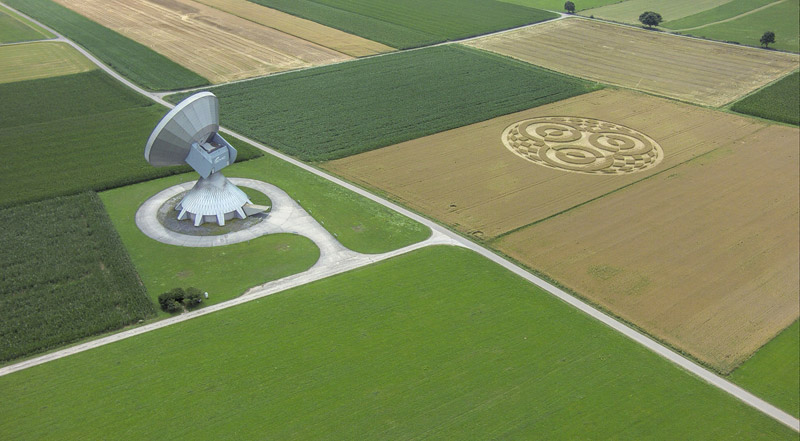 If we apply these number to DATES we end up with the following:

July 18th - according to the Mayan Calender (José Argüelles) the beginning day of a new calendar round, Imix 1 (RED) Every day in this first wave is important - as shortly afterwards the Mayan New Year begins on July 26th.

The important dates seem to be the red ones - July 18, September 4, October 22 - which explains the omission of the number 9 / 9 rhombuses.

I'm sure this is only the SURFACE of what is really hidden in this crop circle - Can anyone help me to decipher MORE of it?

Would love to read your opinion :)

Werner Neuner has also written a beautiful analysis - he discerns a MESSAGE of PEACE in the crop circle!

Number 3 ist most prominent, though, lol :-)

The number of TRINITY.

Interesting to note: the crop circle appeared near what is called "ERD- funk-station" -